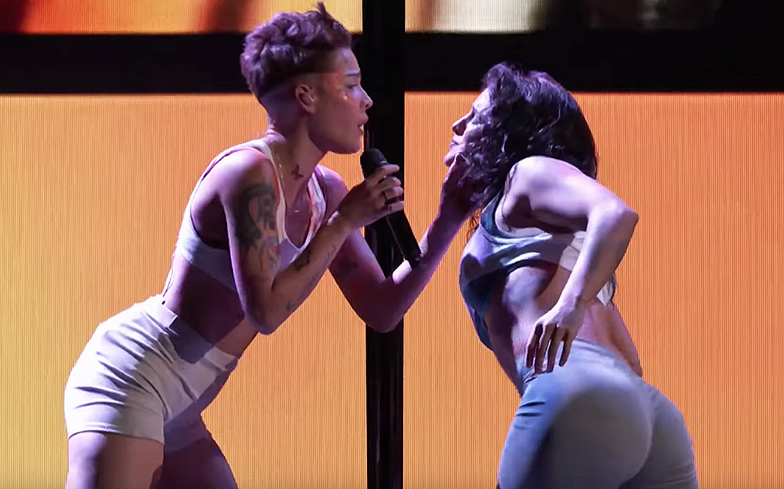 She had previously hit back at trolls who targeted the performance.

Halsey, who is proudly bisexual, has fought for LGBTQ representation during her career, and that continued during her rendition of new single Without Me on The Voice US last year.

At the time, the singer said she was proud to have pissed off the homophobic viewers at home who missed the message.” She continued: “Representation matters. Thanks The Voice for giving a space for this vision to come to life.

“And thank you Jade Chynoweth for being an incredible human who used her body like the ultimate instrument for this collaboration.”

Unfortunately, a few bigoted tweets isn’t all that Halsey had to put up with following the performance. Speaking to The Times, she revealed that her phone number was leaked, which resulted in her receiving rape threats.

“People were going, ‘What is this lesbian garbage on my TV?’ Yet there are performances by other artists that are way more sexual,” she said.

“But all hell broke loose. My phone number leaked, my email leaked. People were texting me things like, ‘I’m going to rape you straight.’ Heinous stuff.”

Halsey reflected she thought the abuse would be worth it, if it helped more LGBTQ people find acceptance. “Here’s what’s important, though – the young people sitting on the couch next to that angry dad, that angry mom, hearing them spewing hatred,” she said.

“The kid that’s scared to come out needs to see that on the TV.”

Earlier this year, Halsey slammed a troll who claimed that Miley Cyrus and Liam Hemsworth’s marriage failed because of Miley’s sexuality. The Twitter user wrote about how bisexual people were ‘greedy’ following allegations that Miley cheating on Liam with a girl.

Referencing the user’s previous posts about Captain Marvel star Brie Larson Halsey wrotr: “Doesn’t surprise me that ur saying this and ur page has u crying about Brie Larson too!

“Stop being afraid of women who aren’t afraid to do what pleases them and not other people.”