Hair The Musical is camp, gratuitous and a whole lot of fun – review 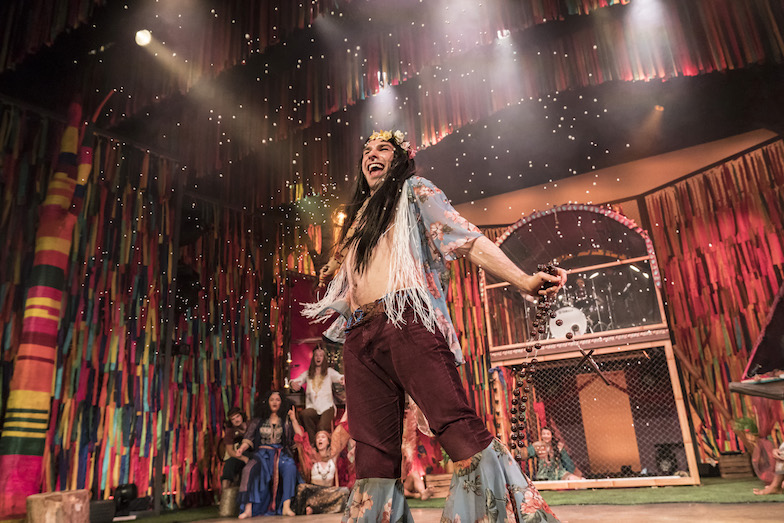 X Factor alumni Jake Quickenden and Marcus Collins star in the touring musical, which has opened at the New Wimbledon Theatre, directed by Jonathan O’Boyle.

Making its Broadway debut in the late 1960s, this tour marks the 50th anniversary of the acclaimed hit musical and it’s easy to see why Hair has stood the test of time. Packed full of instantly-recognisable hits such as Aquarius, Good Morning Starshine and Let the Sun Shine In, it tells the story of a group of hippies fighting the establishment, avoiding conscription for the Vietnam war and generally living and loving life in New York City.

This touring production stars recent Dancing on Ice winner and former X Factor contestant Jake Quickenden in the lead role of Berger. Joining him is fellow X Factor finalist Marcus Collins as Hud and Hollyoaks’ Daisy Wood-Davis as Sheila. We were particularly impressed by the quality of the singing from the principal cast – there certainly weren’t any weak links; in fact it was difficult to pick a standout, as several of the singers turned in hugely impressive performances.

It’s a generally well-staged and produced show. The space is vast and at times felt a little under-used – it’s full of bright and vibrant colours, but we felt more could have been done with the set. Thankfully some cleverly choreographed numbers more than made up for this, and there was some nice visual trickery with the use of props and projection. There was plenty of audience interaction, too, which helped spice up proceedings throughout – by the end of the performance, everyone in the auditorium was on their feet.

There’s a lot here to like. The quality of acting may not be the strongest throughout, but this is a show that’s about the music and here Hair really delivers. The singers impress, the band is tight and the songs are great. It isn’t subtle or clever or thought-provoking, but to criticise it for these reasons would be to miss the point entirely – it’s camp, gratuitous and silly, and above all, a whole lot of fun.