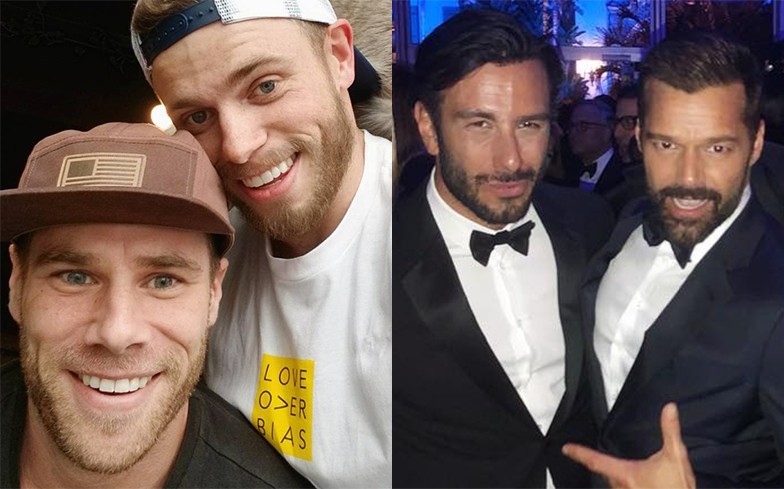 While it looks like Gus and his partner Matthew Wilkas had a great time at the Oscars on Sunday night, they both left feeling “Living La Vida Lonely” according to the out athlete’s latest Instagram post.

Written in the style of a Craigslist ‘missed connections’ advert, the post extends an invitation to Ricky Martin and his husband Jwan Yosef to “connect” together. While the pair don’t state what they’re ‘looking for’, we’ll let your minds run wild.

“We were wearing black Ralph Lauren tuxedos, mine had little cowboys on it,” Gus wrote.

“You were also both wearing tuxedos because it was the Oscars and everybody does. You and your husband stood out though. Partly because you’re both gorgeous but also because you’re literally Ricky Martin and Jwan Yosef.

“The four of us chatted and laughed but then, sadly, got separated in the chaos of the Oscars. My bf and I searched for you both for the rest of the night but never found you again. In town for a week. Let’s connect.”

“What a fab foursome that would be, my mind boggles,’ wrote one fan.

“Are we going to find out how this story ends?” added another. “The suspense is killing me.”

Fortunately for fans eager to see how the story unfolds, Ricky addressed the post during an interview on The Talk, where he was asked by host Julie Chen if he would meet up with Gus and his partner.

“That is so cute,” he said. “I mean c’mon, and clever! That is so special. I mean, he’s a national hero, give me a break! And are we flattered? Yes we are. And of course we met [at the Oscars].

“We will definitely connect, of course. We love you brother.”

And it seems Gus is still down for a meeting, as he later tweeted that he would “clear his schedule for the rest of the week” for Ricky and Jwan.

*clears schedule for the rest of the week* https://t.co/E1bOeAPLYq

Ricky recently revealed that he hopes his role in true crime series The Assassination of Gianni Versace: American Crime Story will help bring awareness around different kinds of relationships.

Referring to his character Antonio’s relationship with Gianni, which is suggested is an open relationship, he said: “I want to normalise relationships like this. It’s good for the world; it’s good for me as a gay man with kids.

“We want to normalise another kind of reality for open relationships. And that’s what we’re doing. There’s absolutely nothing wrong. We’re just two very self-secure men that are completely in love with each other, that trust each other to the maximum level, and here we are. But the scene was very intense and painful.”

Edgar Ramirez plays Gianni Versace in the show, while Penelope Cruz takes on the role of Donatella Versace.