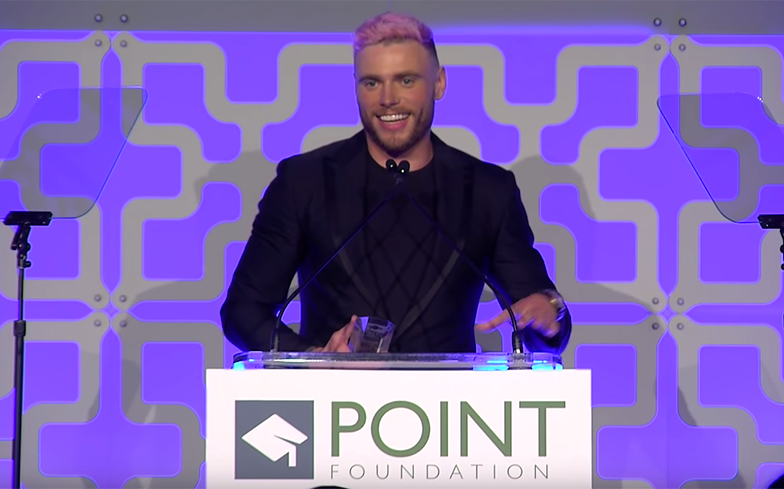 “We have a vice president who still believes in conversion therapy, for fuck sake.”

The openly gay Olympic freeskier delivered a passionate speech at the 2019 New York gala for The Point Foundation, which aims to help LGBTQ students fulfil their full academic potential, while accepting the Point Leadership award.

He started off by relaying his coming out struggles to the audience, telling them that he wish he had been more “comfortable in his own skin”, but admitting that it took him “many years to get to that point”.

“The adolescent years of a queer person’s life are not easy,” said Gus. “They involve a great deal of stress and anxiety. We often face ridicule and we fear torment. I remember wishing more than anything else that I were just straight.

“I would pray that I might wake up and not be gay anymore. I would be ‘normal’ and the rest of my life would be easy. I worked twice as hard at everything I did to make up for the fact that I was gay – something I thought was a shortcoming at the time.”

Even though Gus became a professional skier, joined the Olympic team and won his first medal, the 27-year-old said he didn’t live those moments to the fullest, because he “truly wasn’t present for them”.

“The person on stage in Russia bowing their head to have a medal put around their neck was me, sure, but it wasn’t the real me,” he continued.

“I remember just not even being able to feel the gravity of that moment because I was so distracted trying to keep up a façade, trying to continue to make the world believe that I was someone that I just was not.”

He then attacked Brunei for implementing a new law that will see LGBTQ people being killed for same-sex relations.

“There are countries like Brunei where gays are being stoned to death in the streets. Even here in the US we have a president who has made repeated attacks on our community and our trans brothers, sisters, and gender non-binary siblings.

“We have a vice president who still believes in conversion therapy, for f**k sake.”

Watch Gus’ passionate speech at The Point Foundation gala below.