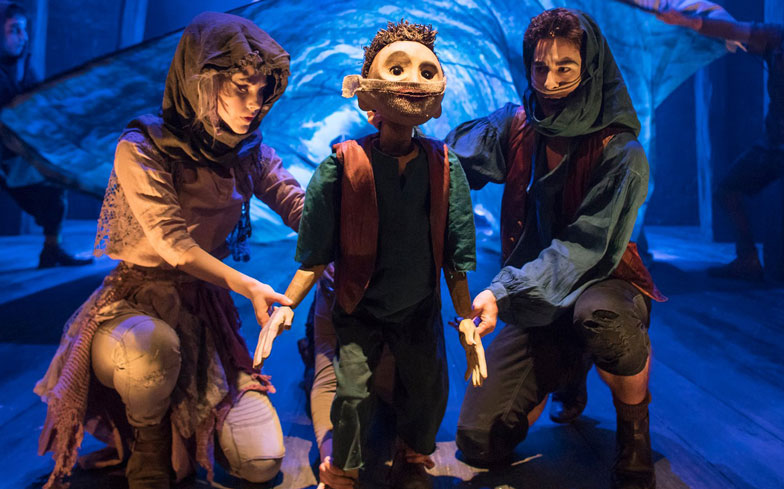 Bristol OId Vic’s adaptation of Victor Hugo’s novel has arrived into London’s West End in the finest of forms. Lead by a cast of recognisable names, there was a nervousness felt before the show began in that wondering – however brilliant their reputations are – if they could move this signature novel to the stage. They can, and they do it rather darn well.

Louis Maskell thunders ahead as our star, and we meet his Grinpayne as a young child and puppet before he rises and grows into a real character (and actor). Vocally pleasing and awkwardly understated throughout, there’s a sense of questioning to much of what Louis delivers. It’s a intrigue that always finds you wanting more. His innocence and vulnerability places a love into the character that means you’re regularly rooting for the underdog. And thankfully, come the end, such a polite delivery means your heart soars as those once considered ‘different’ get their moment in the spotlight.

Accompanied by Julian Bleach’s husky and rather unnerving clown, Barkilphedro, the weird become wonderful as the story unravels. Mark Anderson as Dirry-Moi is a hilarious inclusion throughout, while Julie Atherton’s reign as Queen puts her at the centre of great success – mischievous smirk and quirky character beaming bright.

Locked inside the giant jaws of our leading man and with the design continuing through the auditorium and front of house areas, there’s a commitment to plunging the audience smack into the middle of this tale. Although it can feel a little oversized for the Trafalgar Studios with a cast of 16, the wonderful scenic design of Jon Bausor frames all in the most perfect of ways. And, with some of its stars and supporting band featuring throughout the seating, you can’t help but get lost and want this cast to succeed – such in their dedication.

Tom Morris’s production, adapted by Carl Grose, is a thrilling journey that’s sure to make you laugh and weep in equal measure – voiced ideally by Louis Maskell. London’s West End has been asking for a story like this for a long time, and we’re pleased that it has finally come along in the uprising of a character and tale of difference, and the power held within such a being.

This tale of a man who defies the limitations of his deformity and the closed attitudes of those around is sure to warm even the coldest of hearts.