Grindr the Opera: falling under the spell of the great god Grindr – review 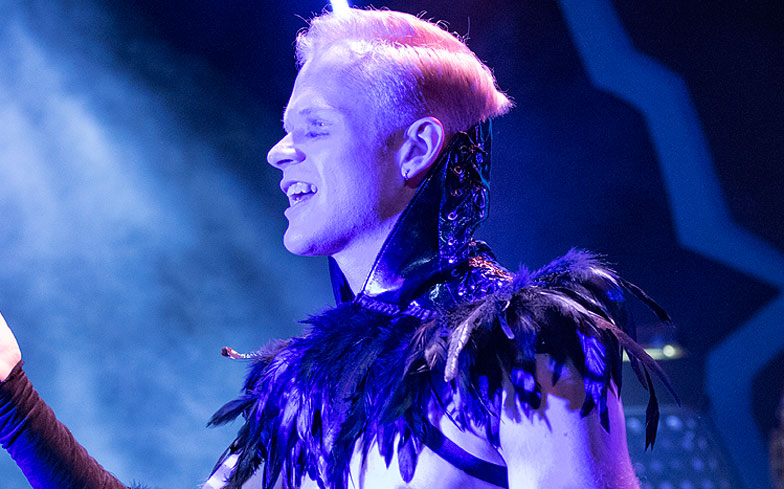 This is the first musical production to be staged at Above the Stag Theatre’s shiny new and improved premises in London’s Vauxhall, and it’s an absolute belter.

The ups and downs of Grindr, and other gay hook-up apps, have been explored ad infinitum in many a gay play, but this is the first time that we’ve seen Grindr itself on stage as a character. Christian Lunn gives an unforgettable performance in the titular role – dominating proceedings as an ever-present techno-god, kinkily coutured in fetish-wear and feathers. Not only a stunning visual presence, Lunn seriously impresses with a singing voice that’s pure aural pleasure – using his vocal talents to tempt and persuade the other characters of the piece, rather like the sirens of antiquity tempting sailors to their doom…

Underpinning this mythological grandeur are four characters whom we know and recognise from the real world. David Malcolm is Devon – a sexual health worker who’s been single for a while after a long term relationship. Malcolm gives a complex portrayal of someone who’s wary of hook-up culture and plays all the nerves and awkwardness of a first-date to perfection. The date in question is Tom – a seemingly carefree and charismatic gay man, played with vim and vigour by the delectable Matthew Grove. The developing interactions between this sweetly lovestruck duo are unusually well observed by author Erik Ransom – he has an uncanny knack for absolutely nailing situations and conversations that will be utterly familiar to many of the gay men in the audience.

Related: Gok Wan and Gay Times join All Out to give the world a Global Pride Makeover

Meanwhile, slutty twink Jack – played with engaging exuberance by William Spencer – has arranged a rendezvous with an older businessman in a hotel room, who turns out to be Don – a brexit-voting tory, oozing with self-loathing and internalised homophobia – brought magnificently to life by Dereck Walker. The interplay between this parallel pairing is heightened and hilarious, but again completely grounded in truth. The juxtaposition of the gay men of our reality and the flamboyant fantasy of Grindr and his otherworld minions – performed with consummate comic timing by Tom Blackmore and Robby Khela – is what makes this piece such a triumph, and raises it above other works covering similar topics.

The music and lyrics, also by Erik Ransom, are sensational. They work hand in hand with a plot that twists and turns via slapstick and farce to an ultimately rather profound conclusion that resists the temptation to dish out judgements to those under the spell of the great god Grindr. Direction by Andrew Beckett is outstanding – Beckett knows exactly how to give his audience the ride of their life. The magnificent set by David Shields and electrifying lighting by Jack Weir conjure a cyber-world that’s daring and dramatic. LED pipelines and illuminated doorways form a perfect domain for Grindr to inhabit and from which to pull everyone’s strings. Every aspect of this show compliments the others to create something very special – something that is even greater than the sum of its parts.

We’ve seen a lot of fine work at Above the Stag over the years, but this really is one of their greatest achievements – and one that really shows off what the new space can do. It has the potential to become a cult classic, in the vein of a ‘Rocky Horror’ for the smartphone generation. Miss at your peril – give in to the siren call of Grindr the Opera.