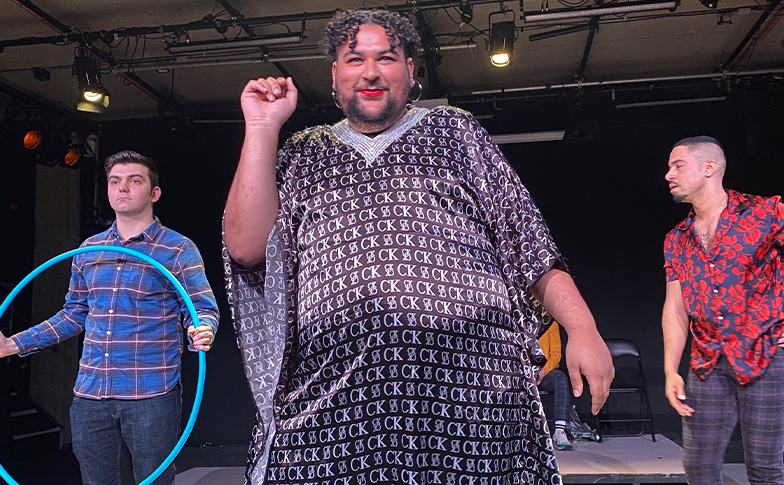 Over the weekend we were invited to check out some of the works presented by The Upsetters, who were holding a week-long celebration of artists of colour. It took place as part of the Takeover Festival at the intimate Bunker Theatre in London Bridge, which is running until the end of this month.

While we caught a selection of works, we were there to feature Grindr Survivr, a new play focusing on a series of events which inspired the book of the same name. It was presented as part of a scratch theatre night – one of five short plays (about 20 minutes apiece) selected from over 160 open call submissions. Being a scratch performance, it’s a far cry from what audiences might expect from a night at the theatre – there’s very little in the way of staging, lighting or sound, with each group only having a few hours’ rehearsal time before taking to the stage.

It tells an interesting story in an entertaining way. We’re presented with four characters – there is a central protagonist and we’re given a snapshot into a certain time period in his life. Evidently there has been a recent break-up and our hero is still thinking about his ex, and we’re treated to a couple of Grindr encounters that he embarks upon in a bid to move on. Over time he develops a mantra by which he lives – “tap, meet, shag, repeat” – which seasoned users of the app will be all too familiar with.

It’s an amusing and engaging show with plenty of funny moments. Some of the characterisation is a bit exaggerated, but there’s nothing here beyond the realm of possibility – as absurd as some of the situations seemed, we could also perfectly imagine them happening, even if it was all a bit cringeworthy and awkward. Much of the content felt very immediate and relatable. Furthermore – while it’s apparent that LGBTQ+ stories are being told more than ever on the stage – it’s still rare to see people of colour and interracial couples featured prominently, so representation in a production like this very much matters.

This production of Grindr Survivr wasn’t a highly-polished finished article, but that’s beside the point. What we were presented with was a funny, contemporary and engaging short play which showcased the potential of the material here. We’re interested to see what happens next with it.