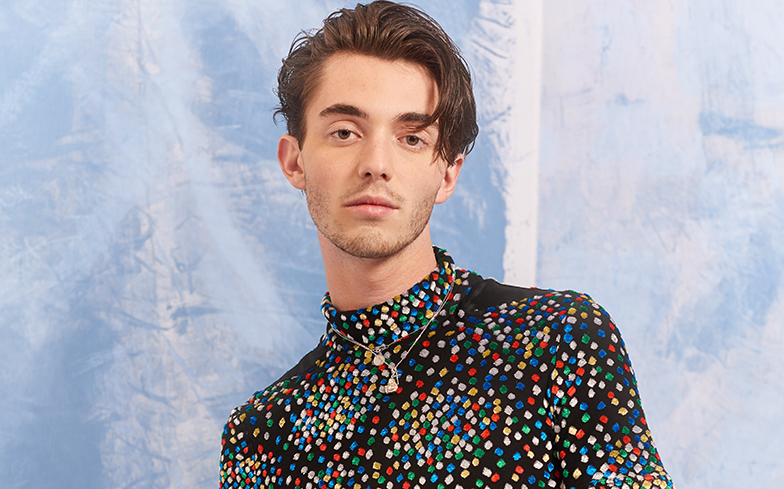 Nearly a decade after he first rose to international attention following a video of himself giving a rousing rendition of Lady Gaga’s Paparazzi went viral, Greyson Chance is celebrating the career milestone by releasing some of his best music to date.

Last year we had the magnificent album Portriats from the Oklahoma native, which brought together his astute knack for emotive songwriting and earworm hooks.

It was also the first full-length body of work Greyson released since coming out publicly in 2017, with songs reflecting on the relationship and subsequent break-up with his former fiance. Time away from the spotlight allowed his to re-calibrate his creativity and make music without the intense expectation of record executives.

“Life relaxed for a second, allowed me to go back home, figure out what was going on, talk to my friends, talk to boys and realise all these things for the first time,” he tells us for his cover story for the new issue of Gay Times Magazine.

“In many ways, I think my career trajectory has helped me in the long run. That was the thing that I hadn’t realised until this year, because for so long I’d look back on that time thinking ‘I got dropped, it was the worst time of my life’ and at that moment it was, but looking back it was my ability to become who I am.

“Having those two periods of my life, the big career and the nothing happening at all, those have now merged and helped me find a good connection between personal and work life. And that’s what I need right now as an artist, I know how to navigate them both.”

The success of Portraits last year – along with a huge world tour to promote the record – acted as a rebirth of sorts for Greyson.

It caught the attention of major labels and the star once again found himself being offered a deal – this time with Sony Music.

“I remember getting the email from my manager saying ‘Hey, Sony Music wants to sit down with you’ and I remember responding ‘That’s really great, I’m not going to take that meeting’ and he was like ‘Dude, come on, please!’ I didn’t want to go, but I ended up getting dragged, and I was surprised by what I heard at the meeting,” he admits.

“I was actually really hesitant to sign with a major again. I’d worked so hard to build myself back up. Making the decision was a really lengthy process. It lasted four months of us really talking, feeling like they understood my vision.

“When I came back with Portraits, the number one thing that I told myself was that I wasn’t going to compromise anymore on anything; on the music, on the creative, on the way the show looked, on the way I wanted to dress. I’m wearing all white today, I look like a John Lennon, weird Jesus sort of thing. If someone were to tell me ‘Hey, we don’t think this is the right look’ I’d listen, but I’d say ‘You’re wrong because I like this outfit and I’m going to wear it’.

“I didn’t have that when I was younger,” he adds, “so I needed to make sure they understood that, and they were going to let me do what I wanted to do.”

Following the release of his brilliant new single Dancing Next To Me earlier this year, Greyson plans on putting out more new music throughout 2020, leading to a new album.

The singer-songwriter has worked closely with Teddy Geiger for the record, whose previous credits include huge hits for the likes of Shawn Mendes, One Direction and 5 Seconds Of Summer.

You can read the full cover interview with Greyson Chance in the new issue of Gay Times Magazine, which you can buy from our online store now.

Following the huge popularity of last year’s music issue – titled Sounds Like Queer Spirit – we have brought it back!

It’s a celebration of the innovative and inspiring LGBTQ musicians of the moment, pinpointing the queer idols of tomorrow and how they are bettering the lives of queer youth everywhere, now.