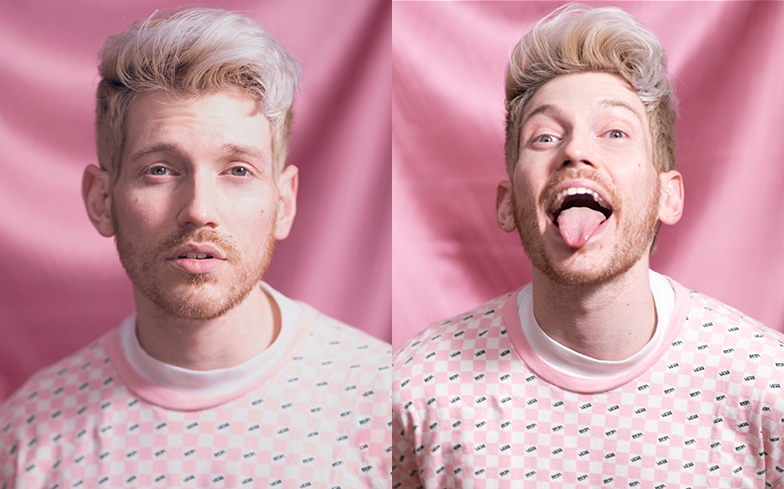 Since 2018, the American singer-songwriter has served pop euphoria with his 80s-inspired synthpop anthems, all of which touch base on queer love and nostalgia – most notably Love Again, Alien Boyfriend and Where We’re Going.

“As an artist, you do it for the people listening,” Gregory tells us over the phone.

“I would want everyone listening to my music to feel loved and to know that they’re good enough… That’s exactly why I’m doing this. But, it’s also for myself. These are self-reminders and it’s nice how it works like that.”

Last week, the emerging pop artist released the video for his infectious pop track, Love Again, so we caught up with Gregory to discuss the message behind the song, golf clubs (you’ll understand later) and his upcoming debut album.

Can you tell me the story behind Love Again?
It’s kind of evolved, which is the fun part! I originally wrote Love Again out of if I could love again, but when making the music video, I realised this whole time that I’ve also been fighting against some dualities inside my heart – which is maybe why I am single! When me and the director Joe Fusco found this racketball court, it sparked this idea of a hopeless romantic battling their shyness and I guess… insane desire? Looking back, I realised I’ve been battling with those two personality types my whole romantic life. It was interesting that this simple idea made me rethink everything. I had to go back to my counsellor and say, ‘Wait! There’s more…’

What’s great about the song is it can also be interpreted in another way: how can I love me again?
So true, yeah. I don’t know about you but I get so insecure with that a lot of the time. I don’t know if you’ve seen the movie Superstar with the character Mary Katherine Gallagher, and she’s like making out with the tree so confidently [laughs]. I can go from that to Perks of Being a Wallflower in under a minute… and vice versa. So what it always comes down to is that you’re going to have all these different seasons of love, but you really do have to love yourself, because not always are you gonna be able to win one over the other. I feel like that’s what I’m always realising, my confidence will always destroy my shyness. You have to embrace both. Do I have time for a story?

Please!
This interview had me thinking and going through my journals – which I’ve kept since high school! I was really shy growing up, the closest I would come to talking to boys was when we me and my friend Katherine would call each other up with low voices pretending to be our crushes. That was our chance to talk to them! There would also be times where I’d be hijacked by this wild romantic that would Sparta-kick myself over the ledge. That same boy, I remember because I did a lot of his homework for him because I was in love with him, he asked me if I wanted to come over and hang out with him and play golf because he lived on a golf course, and I completely lied in the moment and said that I did play golf. That afternoon, I don’t know what came over me, but I was completely hijacked. It was so terrifying but there was a part of me that was willing to take the chance. I look back at how scared I was, but I’m so glad that I did all of that. I have good vibes with that memory, and I just feel like I want to remind myself.

So how did you do at that game of golf? Did you do well?
Well, I don’t know if you’ve ever had to go on a date and play sports…

Absolutely not.
The worst feeling is when you go for it and take that swing… I remember hitting turf. I think I just uprooted a big turf of grass, and I had already been talking up my game! I was like, ‘Oh yeah, this is such a nice club.’ Anyway… I think I blacked out at that point.

Each of your singles from your upcoming debut album are inspired by seasons and nature – where did this concept stem from?
I’ve been writing this concept album for a year now, and it’s still based off of suburban past memories and looking at it with more angelic eyes. It all started when I was in the city and I was going through a major breakup, and I was just alone and wandering by myself. It had me missing some of what I grew up with. I’m sure you understand just being in the city, you kind of lose touch with nature and that feeling of wanting to escape and being alone. The only memories I have of that is growing up in the suburbs, which are kind of highlighted with a lot of beautiful memories, but also a lot of dark memories. This album is bridging between all these nostalgic memories and trying to shed light on them.I guess I just committed my very first single to this yellow colour, and then it just became something that was helpful to create my own colour palette. It’s quite nice to know that I’m going to be releasing this album with a full colour palette and it does definitely have to do with queer identity. I just made a trip to LA and I feel like I wrote the last song for this album, so I’m very excited to put a bow on this colour rainbow story, which is funny because I just heard that Lady Gaga is trying to do that too, so now I have to beat her to the punch!

Chromatica is coming!
Yeah! I was like, ‘Damn.’ We’ll see…

You were ahead of your time there.
That’s a nice way to look at it. But that’s where the whole album is going, suburban bliss and nightmares, and kind of trying to bridge the gap between all these different colour memories. Some are really ethereal while others are dark and zany, and I feel like that’s just how I grew up and I feel like a lot of people also experienced that, whether or not you grew up in the suburbs or not. Childhood and your teenage years are often quite confusing, and you do a lot of wandering…

Everything you’ve released so far has been positive and light – is it important for you to do this, especially because it’s queer love?
That’s a beautiful question. I think so, I think it’s important to see everything as a gift. I know my dad would always say that, and I’d get so annoyed! Whenever I was pissed, he’d say, ‘There’s a gift in this.’ But it’s true, I definitely want to shed light on all the different dilemmas and beauties, like I said, but at the end of the day it’s important to know that you can transcend that. As an artist, you do it for the people listening. I would want everyone listening to my music to feel loved and to know that they’re good enough… That’s exactly why I’m doing this. But, it’s also for myself. These are self-reminders and it’s nice how it works like that. Like, ‘Yo, remember. This wasn’t all tragic. This was quite beautiful and infinite.’

You said the word ‘nightmare’ earlier – does that mean we can expect some darkness on the album too?
Yes, absolutely. There’s this double meaning going on, I think with the last single on the album, which is derived from the idea that something can be lovely and also fucking lovely. Nightmares and daydreams definitely go hand in hand. I feel like when I look back to memories throughout my childhood, there’s an equal share of both. It’s definitely mixing up the two and trying to figure out what it all means.

So when can we expect this album?
We’re hoping to drop this in early Spring. My goal is May – so you can hold me to that!

Watch the music video for Love Again below.

You can listen to the acoustic version of Love Again here and the dance remix with Menrva here.