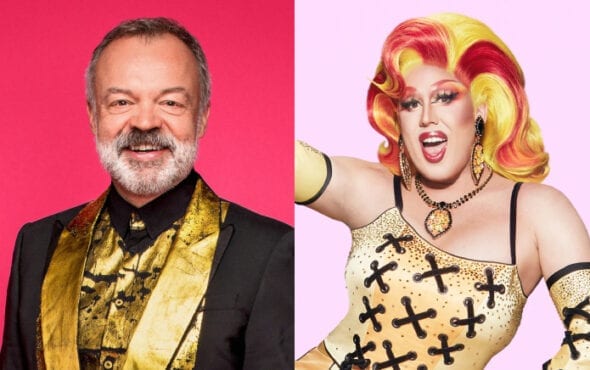 Graham Norton had a “whirlwind romance” with Drag Race contestant Tina Burner in the noughties.

In his 2014 memoir, The Life And Loves Of A He Devil, the comedian reminisced on his relationship with the legendary entertainer and said he was “heartbroken” when it came to an end.

He recalled the night he met Tina – birth name Kristian Seeber – at New York’s Barracuda bar, where he descried him as “tall and broad-shouldered with an easy smile that took up half his face”.

Graham, who serves as a judge on the Drag Race UK panel, went on to praise Tina for the “special spark that fires with him,” saying “when he decides to shine his light on you, it makes you feel as special as he is.”

According to the memoir, their broke off their romance after a few months. However, they later reconciled when Tina moved into Graham’s home in London, which “lasted for about six months” and was a “disaster”.

“I realise that even to a perfect stranger the outcome would have been glaringly obvious, but when you are in the middle of something and you are desperate for it to work, you’ll try anything,” said Graham. Tina eventually broke off the relationship. Graham continued: “The madness was over. But this time with no shouting or histrionics, just some slow, heavy tears shed over lunch in an empty restaurant.

“I walked home, finding some comfort in the fact that a man in his mid-forties could still feel such heartache.”

Graham went on to say that he seen Tina’s act in New York, which he described as the “perfect job for him”. In the premiere, the performer left the judges slain when she performed a lip-sync to Christina Aguilera, Pink, Mya and Lil Kim’s classic collaboration Lady Marmalade, beating Elliott and Kahmora in the process.

On this week’s episode, the losing team – Denali, Joey, Kahmora, Rose, Tamisha and Utica – will meet the lip-sync winners for the first time, before overacting in cheesy ‘RuPaulmark’ holiday movies.

Graham will be absent from this week’s instalment of Drag Race UK, with Alan Carr taking his place on the panel. The episode will see the 11 remaining contestants will compete in Rats: The Rusical.

You can watch the trailers for Drag Race season 13 and UK season 2 below.