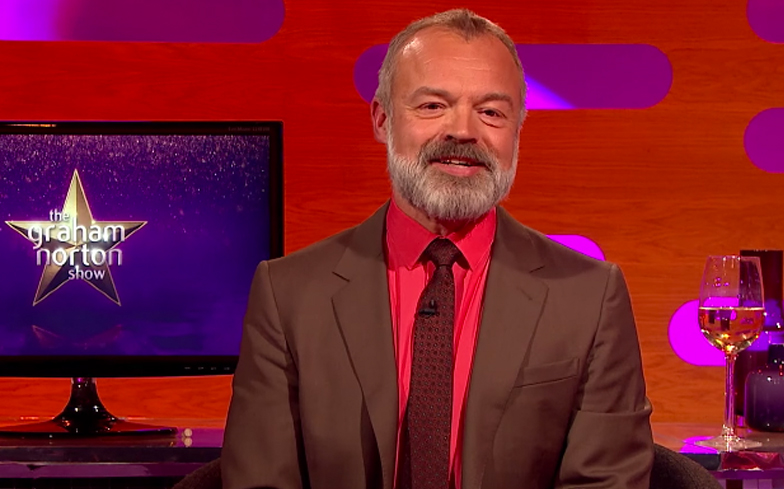 The legendary talk show host was talking to Katie Couric on a podcast when he made the remarks.

Graham Norton has revealed in an interview that the reason he stays off of Grindr is because of his job at the BBC. Opening up about his love life, Norton said: “I couldn’t do Grindr, because you know, of what it is, and I work for the BBC and I felt Tinder was socially acceptable, I could do Tinder, but no more.”

Elsewhere in the podcast, the talk show legend opened up about why he prefers living alone. “I would prefer to live alone for the rest of my life rather than live with towels folded incorrectly,” he said.

He continued, saying: “Petty is important. That’s why marriages break up. Marriages don’t break up because of big things.

“People co-habit because they have to, because it makes economic sense, I don’t think anybody wants to live with anybody.

“It’s like the toilet paper is hung the wrong way around, it’s kind of the bread doesn’t go there, and also my problem is of course, I’m old, so the longer you leave it, the worse this gets.” And even though Couric’s podcast is described as “unexpected” and “un-buttoned” we’re glad she didn’t pursue a certain line of questioning. And that’s in regards to what Graham’s own “red chair story” would be…

For those unaware of the concept, on The Graham Norton Show there is a segment where guests sit down and tell their own embarrassing or funny story, and if it’s not good enough they get flipped off of the chair.

During a press event last year, Graham was asked what his story would be. He recalled the time that he had a “gentleman caller” around and after he left, Graham attempted to find the condom.

After being unable to locate it, Graham decided to just let it go. The next morning, he was out walking his dog, Bailey, and after clearing up its “business” he looked over and saw the dog “lying on the ground clawing at his backside. There it was, like a great big ghostly finger hanging out of him.

“So I had to get it out. Now, all I’ll say is no matter how stretchy you think they are, you’ve no idea! Honestly, I was half way across the park with this thing!

“I mean, it’s morning time, mothers with their children were going to school. I went, ‘No I did not have sex with my dog!’”

The Graham Norton Show is currently airing on BBC 1 at 10:35 pm on Fridays. Next week’s episode has guests including Cher and Rupert Everett.