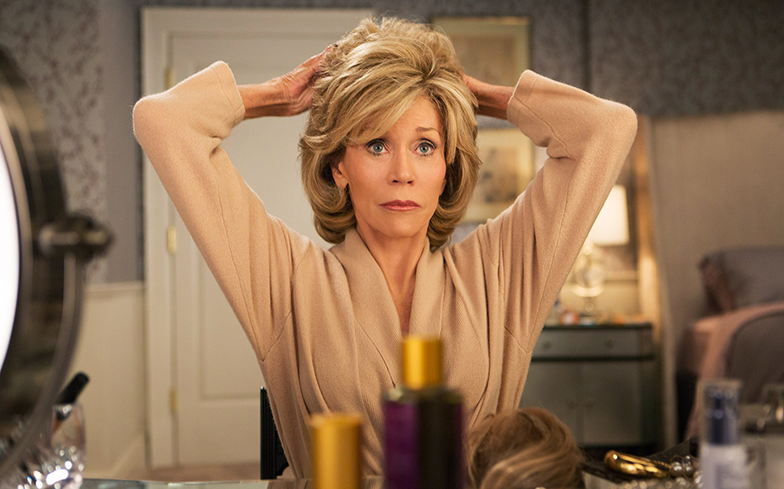 “A lot of things happened before you came on the scene.”

One of the lead characters on Netflix’s acclaimed comedy series, Grace and Frankie, has seemingly come out as bisexual.

In the second episode of the show’s recent fifth season, Grace – played by Academy Award winner Jane Fonda – hints at her sexual history after Frankie (Lily Tomlin) asks her: “You show me yours and I’ll show you mine?”

Grace hits back, “Okay, do you wanna have sex with me or not?” to which Frankie responds: “No, but I love how uncomfortable it makes you!”

“It doesn’t make me uncomfortable!” Grace tells her bff, before informing her: “I’ve kissed a girl. A lot of things happened before you came on the scene.”

Fans of the series were quick to assume that Grace just came out as bisexual.

“I’m sorry but now you can’t tell me Grace and Frankie won’t end up together because it would be just rude,” wrote a fan. “I NEED them together NOW!”

Another said: “Two episodes into Grace and Frankie and they’re the gayest they’ve ever been, PLS.”

“I don’t think anyone understands what this Grace and Frankie scene did to me because FUCK it’s been 12 hours and I still haven’t thought about anything else,” tweeted another.

One fan suggested that Grace is Frankie’s future wife, which we are so here for.

The fifth season of the beloved series premiered last week to universal acclaim.

Since its debut back in 2015, the show has received five Primetime Emmy Award nominations for Outstanding Lead Actress in a Comedy Series and a Golden Globe Award nomination for Best Actress – Television Series Musical or Comedy.

All five seasons of Grace and Frankie are available now on Netflix.