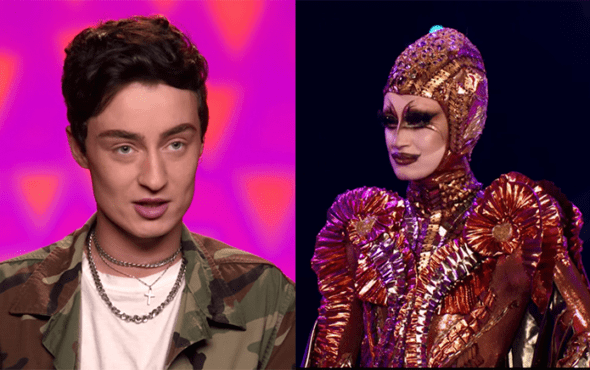 Gottmik discusses her journey as a trans man and the obstacles she overcame during episode 2 of Drag Race season 13.

For the maxi-challenge, the girls had to write and perform an original verse to Mother Ru’s iconic track Condragulations, while also creating choreography as a group.

During the rehearsal, the LA-based drag queen began to get emotional, when her verse began to play for the other contestants.

The new verse included the lyrics “Gottmik was born a girl, baby.”

“Oh my god, I wrote ‘I was born a girl’ and I haven’t even talked to these bitches about it.

“I did not know I was going to have to have all these girls hear about my gender situation before I can talk to them.” she said.

The next day Gottmik reflects on the rehearsal with Olivia Lux stating: “I feel like I based all my lyrics about my gender situation and I haven’t even talked to you guys about me being a transgender guy drag queen.”

Olivia Lux quickly lent her support telling Gottmik that she is “changing the face of drag”.

The conversation then moved on to pronouns in which Lux said “Like out of drag I use he/him/his and in then in drag, she/her/hers.”

The history-making contestant went on to open up to the other girls during Untucked, about her identity and the emotional week she had.

“This week was one of the most emotional weeks of my life, just because when we went into the rehearsal I was just kind of taken off guard because… I haven’t talked to you guys about my gender situation and all of that.

“When I got out there I was just paralyzed, just so not in the moment at all. You know, I’m a transgender guy that does drag,” she said.

Gottmik swiftly received praise from the other queens, who reassured her that she can be herself and that she is a trailblazer for the community.

During the interview, the Emmy-winning host was condragulated for making it into the Guinness Book of World Records.

When Ru declared that he would like to make a record as the “world’s richest television host,” he was questioned by Colbert on the biggest lesson he’s learned from his time on Drag Race.

“It’s to keep an open mind. I walked into this thing with an idea of what drag is and the kids have a different idea. They keep changing it,” said RuPaul, before diving into Gottmik’s casting.

“This season we have a trans man who is on our show who is competing with the other drag queens and this man is fantastic. Fantastic! So, I keep moving with what the kids are doing.”