GIRLI is using her platform to ignite conversations around feminism, sexuality and mental health 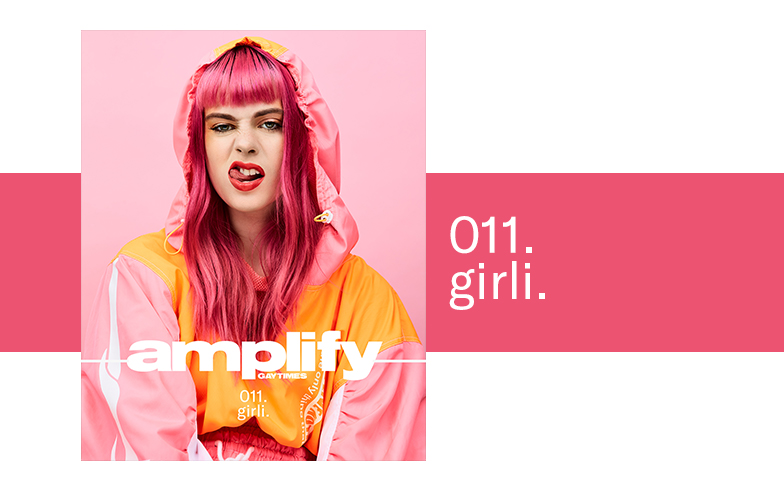 “We live in times where you’ve got to speak up, or just watch the world fucking burn,” GIRLI tells us as we sit in a crowded Shoreditch cafe, moments after she entered the building in a black leather biker suit – helmet in hand.

“You have so much influence now with social media. I think it’s immoral not to use that.” The pansexual, London-born singer-songwriter and rapper has made waves in the world of pop ever since the release of her punk-influenced 2015 debut single, So You Think You Can Fuck With Me Do Ya. The track was followed by feisty anthems such as Girls Get Angry Too, Girl That I Met On The Internet and Not That Girl, all of which provide a much-needed commentary on feminism and sexuality. Since then, she’s amassed a loyal, dedicated fanbase of people who don’t identify as part of the “in-crowd”, much like herself – hence the title of her long-awaited debut album, Odd One Out. Released at the beginning of April to critical acclaim, the record sees the star tackle a variety of genres from bubblegum pop, punk, rap and PC, and features the well-received singles Hot Mess, Day Month Second and Deal With It.

But let’s throw it back a little bit and provide some context: at the age of 12, GIRLI – real name Milly Toomey – originally wanted to pursue a career as an actress, but after two unsuccessful auditions, left the dream behind. Three years later, she formed an all-female band where she played the role of singer and guitarist, however she admits that it didn’t last too long because she wasn’t the easiest person to get on with. “I was totally neurotic. I was the bossiest, most annoying band member ever. I thought I should carry on on my own. From that, I picked a name and became GIRLI.” During this time period, she realised her attraction to both men and women, although she thinks she was asexual until she was in year nine. “I remember going on a lot of dates with boys and saying to mum that I didn’t fancy them,” she reveals. It wasn’t until she made friends with an open-minded school friend that she started to explore her sexuality and embark on dates with women. The performer then came out as bisexual at a Tegan & Sara concert, no less, which she says was her introduction to the LGBTQ community and a “safe space” from the rife homophobia of her secondary school. Now, however – at 21-years-old – she identifies with the term pansexual, although she explains that she personally doesn’t like to conform to labels and only does so to ignite a conversation for her fans. “I make sure to talk about it in my interviews and social media because a lot of my fans identify as queer, and it’s really important to make sure they shouldn’t feel weird or different for having those feelings. A lot of them are super young and discovering those feelings for the first time.”

As well as sexuality, GIRLI has become well-known for tackling other ‘taboo’ subjects such as feminism, mental health and gender constructs in her work (like we mentioned earlier). “It shouldn’t be something where you have to say that you are a feminist, it should be like ‘Are you not a feminist?’, because if you’re not a feminist… that is an issue,” she passionately states, before adding: “It’s really sad when women identify themselves as not being a feminist, because they just haven’t spoken to the right people. They haven’t been educated fully about it.” On Girls Get Angry Too – which she released when she was 18 – the star ponders, “What’s a girl, what’s a boy? Why are there gender sections for toys? And sorry if I’m out of line, but I don’t want Hamley’s to decide if my kid’s a fireman or a bride.” And on Hot Mess, she sarcastically hits out at society’s perception of female intelligence: “I’m so stupid please tell me, how the world works, I’m female you see. Please stop using such big words, my brain can’t take it, I’m just a little GIRLI.” Because of lyrics such as these, and her unabashed confidence, GIRLI is often called ‘controversial’ by mainstream media. “It happens a lot,” she tell us, before hitting out at the lack of criticism for male artists who basically do the same thing: “There are so many men who I think are great artists and are just as opinionated as me, who have made a song that is even more opinionated and are celebrated as ‘the future’ – and I’m called whiney. This industry is so male-dominated. It’s frustrating for me when I haven’t been added to that playlist or put on that festival bill because some male editor thinks I’m moany. “It’s subconscious as well. A lot of people making these decisions wouldn’t even realise that they are swayed to go for a male artist rather than a female, it’s so ingrained.” Rather than dial down the political edge to appeal to a wider audience and attain chart success, GIRLI chose to amp it up – which brings us onto Odd One Out. She tells us of the title: “I felt that I don’t fit in with the pop world and I don’t fit in with the indie world – where do I fit? And I started to think that I don’t really fit anywhere.” Conceived over two to three years, the record sees GIRLI address her issues with mental health, particularly on new single and album closer Up and Down. “I am way too open,” she admits. “I literally meet someone and five minutes later I will tell them my whole life story. I am on antidepressants and it took me a few months of being on them where only my mum and my partner knew. I don’t think people should be ashamed to be on them, but I still felt a little bit that I didn’t want to tell people because maybe they will judge me for it, or they think that I will be acting differently for it.” She pauses, and continues further: “I love my pink hair, I am very proud of my sexuality and I am very proud of my feminist beliefs and political opinions, but there are still areas of myself where I am really deeply not on the surface, ashamed of in a way. My mental health is constantly up and down and I beat myself up about that a lot.”

In the three years it’s taken to finally release her debut album, GIRLI says she and her music have drastically matured. “When I first started, it was a lot younger sounding and much more opinionated but in a very immediate impulsive way,” she tells us. “I still love who I was when I started and became GIRLI, but I think this a more mature phase, and I don’t connect with the old songs that much anymore. I love that people still do but I don’t, it’s not really me.” She credits her massive platform and the power of social media as a reason for her maturation. She was once messaged by a ‘fan’ on Instagram, who requested she – for some bizarre reason – shave her armpits, and her initial reaction was to post the screenshot of the conversation on her socials to call him out. “Someone replied saying, ‘I get why you are angry, but you shouldn’t reply in the aggressive way to people.’ And it made me think a lot more about the way I carry myself and the way I respond to think. He is a dickhead, but at the same time, it is important to educate people on how to respond to things like that better.” Instead of setting a bad example for her fans, GIRLI decided to use her power for change, saying it’s “really important” for artists of her status to speak up on political issues, whether that’s Tr*mp’s anti-queer policies, Chechnya’s anti-gay purge or Brunei’s death penalty for LGBTQ citizens. “You have so much influence now with social media and the fact that you can put something out and literally see how many people are viewing it and engaging with it. I also understand why sometimes people would say, ‘I’m leaving this, right now I might not talk about this, because of my family or this or that.’ But I think if there is a situation where you posting about it can actually change the outcome of something, you have to do it.”

GIRLI’s debut album Odd One Out is now available on iTunes and streaming services.