GIRLI is the feminist pansexual pop star you need to stan 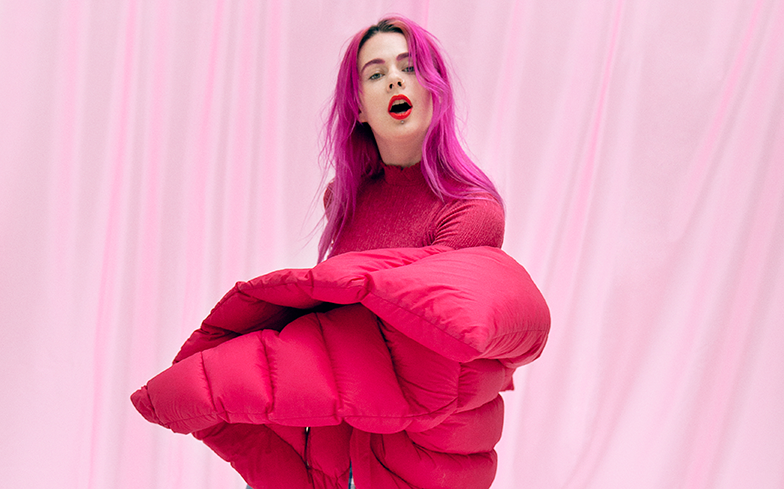 GIRLI doesn’t give a flying fuck. Like, at all. Since her 2015 debut, the 20-year-old Londoner – real name Milly Toomey – has become one of the most outspoken artists in the music industry due to her frank (and often feisty) lyrics about feminism and sexuality.

“I’m called ‘brassy’ a lot, and I think there’s this image that if you’re annoyed or angry in your music, then you’re moaning or you’re whining,” she tells us. “People are confused when they see someone, especially a woman, being loud and talking about issues.”

Tracks such as Girls Get Angry Too and Girl I Met On The Internet touch on the aforementioned topics, all while exploring a variety of genres such as bubblegum pop, punk, rap and PC. However, her latest single Day Month Second feels like GIRLI at her most authentic.

Because we’re totally-otally obsessed with it, we had a little chat with her over the phone. We spoke about her pansexuality, feminism, and why it’s important for artists to speak up about political issues. Y’know, girl(i) stuff.

How are you doing today GIRLI?
Yeah, I’m good! I literally just got back from LA. I just got back home from the airport five minutes ago, and finally I’m in bed.

Don’t get me started. I’m sat in a little booth with no air, so I’m practically dripping.
[Laughs]

When did you realise this?
I started realising that I liked girls when I was about 14 or 15. I was getting into really LGBTQ, queer bands. I remember specifically, I was really obsessed with Tegan and Sara, and I used to watch all their videos and go to their shows when they came to London. I think that inspired me. My friends at school at the time, a lot of them were gay, and questioning. One of my best friends was always talking about how she found girls really hot, so I started going, ‘Yeah, actually, true!’ Tegan and Sara and bands like that who were really open about their sexuality made me feel like it wasn’t something that was wrong to feel. So I feel really grateful that I had people like that to look up to. Then, I guess as you get older, who you’re attracted to expands as you meet more people. Maybe a couple years ago I started identifying as pan and not just bisexual.

When you get older you start to think, ‘Fuck it, I’m attracted to whoever I’m attracted to’.
[Laughs] Yeah, fully. And it really helps if you have people around you, friendship groups who are open about stuff. My friendship group at school was pretty open, but at the same time, there was a lot of homophobia at school and there was a lot of… What am I trying to say? Anti-attitudes to exploring. So when I came out of school and started doing music, I met lots of creative people and I built this friendship group that were full of queer, trans, questioning people who were free to be themselves, and experimenting. Y’know, making out with everyone at parties. When do you first realise you wanted to make music?
I think around 14 or 15 was a big couple of years for me. I realised a lot. I’ve always loved music, and my parents are actors so I’ve always loved performing. That runs in the family. So I used to do a lot of acting as a kid, and I loved performing in the school plays, and I was in the choir. I didn’t realise that I wanted to do music or be in a band until I was 14. It was then where I was like, ‘Wow, people do this as a job, this is fucking cool’.

Your music is very pro-feminist. Why is it so important for you to do this?
For me, it always came naturally. I was just singing and writing about my own experiences. If someone pisses me off, or someone is sexist to me, I would want to write a song about it. Also, I am trying to be the kind of artist that I would’ve looked up to when I was younger, because I’ve realised how important bands and music were to me becoming who I am and the opinions that I have. When I was younger, I listened to what people in bands said way more than politicians. They were my politicians in a way. They taught me so much, so I guess when you make music, you do forget that you influence people’s lives in a really big way. Maybe some of my songs were the soundtrack to some kids’ adolescence, which is crazy. I thought it was really important to make sure that I was talking about stuff, even if the song isn’t outwardly political, but I always wanted the message and the vibe to be. My latest single is about a breakup and getting over heartbreak, but I wanted to make a song that was badass, make people dance and make people happy, get up and love themselves more. That to me is still political in a sense.

Do you think artists with a massive platform, who could inflict change, should speak up more about political issues?
Totally. It really frustrated me around the time of Donald Trump. People like Taylor Swift, or people who have such huge platforms, and it’s like, all they said was, ‘Go vote!’ But like, c’mon? This is an election that is about more than that. It determines people’s lives, quite literally. I also understand artists who decide that they’re not gonna be super super political, but when there’s an issue that big, it’s your moral responsibility.

Have you faced much backlash or oppression for being an outspoken woman in the industry?
I definitely think that, being as outspoken as I am, has put people off in a sense that I’ve been quite sidelined. I think people find it hard to put me in a box, and I do also think that’s to do with the fact that I’ve made loads of songs in different genres. People are confused when they see someone, especially a woman, being loud and talking about issues… I’m called ‘brassy’ a lot, and I think there’s this image that if you’re annoyed or angry in your music, then you’re moaning or you’re whining. It’s just like, shut up. That’s been really frustrating for me, because it’s much harder to get support from people like radio, festival bookers, and people in general really. A lot of people don’t get it. But what I also hope is that it means that the fans that I’m building appreciate my honesty. I only ever wanted that. I wanted to be real. I wanna be completely honest. I’m very outspoken just in the sense that I’m very open with my life as well, with mental health struggles, and my opinions, about anything. Not just political issues. My main agenda is to build an artist project that people know is real, and is face value.

Male artists who are outspoken as you wouldn’t get anywhere near as much backlash. They’d be seen as cool. Do you think the industry still discriminates against outspoken women?
You’re completely right. There’s a few male counterparts of mine that are around right now who are as outspoken as me, and getting more attention. Also, they’re great artists as well. I’m not undermining that, but it’s just so frustrating. But I think the industry is changing, and I think what’s really moved forward especially is how it’s way easier for artists of colour to talk about those issues. Race has become a big topic in music that people are really listening to which is amazing, and it’s the same for sexuality as well. I think feminism still has a way to go in terms of being more widely accepted in music. I just hope in a couple generations time it’s going to be completely normal to have big feminist songs on radio.

I think people these days still don’t understand the true meaning behind the word ‘feminism’. They still think it means hating men, so they’re not ready to label themselves as a feminist.
That word definitely puts people off, which is a tragedy really.

Fashion is a big part of your artistry. Where did the inspiration come from, to wear so much pink?
I think I was just playing around with what ‘GIRLI’ meant. When I chose that name, I was thinking about how pink was this colour that was seen as super feminine, fragile and cute. I wanted to make it powerful, and something that was bold and big. When I started doing GIRLI I was 17, and now I’m 20, and it’s changed a lot. Now, I’ve started to move away from wearing pink. I’m keeping my hair bright pink – that’s the statement – but at the moment, I’m enjoying this femme fatale, badass, shiny blacks and reds vibe, as you can see from the Day Month Second video. Day Month Second is probably my favourite song of yours. Are there plans for an album, or an EP?
I mean, yeah. It’s funny because for me, Day Month Second is also my favourite song I’ve ever released. It almost feels like the beginning of GIRLI 2.0. I feel like for the past couple of years, I’ve released a lot of music that was me sorting out what I wanted to sound like, but in a very public way. Usually, artists make a load of music for a couple years, and then when they’re ready, they release something. But for me, I’ve done that in the public. So I think now, I’m really finding what I want to sound like. There’s so much more music coming, which shows me really developing. I think an album is still a bit of a way off, just because I still need to figure out what I’d want a whole album to sound like.

Day Month Second definitely feels like you’ve arrived.
It feels like the most confident thing I’ve ever released. It feels more powerful. I wrote the song a year and a half ago, and it only just came out. But I’ve loved that song since the day I wrote it, and I still love it. Whereas I’ve found with the other songs that I’m releasing, I liked them when I wrote them, and as soon as it came out I’d be like, ‘Oh fuck, I hate that song now’.

Which ones?
I don’t wanna name any! [Laughs] But a lot of my old stuff, I wished I had more time before I started releasing music. But, also, I’ve been building, and you can’t regret anything.

Exactly. Tracks such as Girl I Met On The Internet and Fuck Right Back Off To La have cemented your fanbase.
It’s all part of the journey!