Girl From the North Country is a bittersweet, Depression-era musical – review 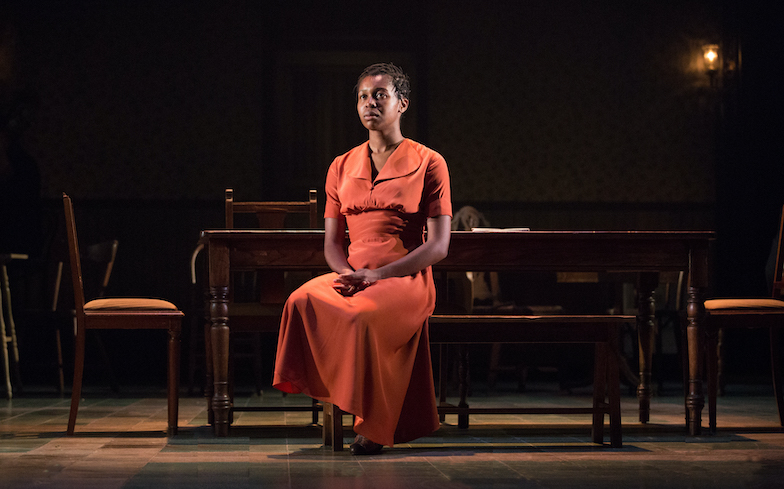 Following a successful 2017 debut at the Old Vic, Conor McPherson’s hard-hitting show has transferred to the West End ahead of a Broadway run.

Featuring some 20 songs from Bob Dylan’s song book, Girl From the North Country is not your typical musical. Nor is it really a jukebox musical; the selection only features a handful of well-known hits, and with the help of some clever new arrangements, it feels much more like a contemporary ‘play with songs’. Aside from Like a Rolling Stone, I Want You and Hurricane, and a few lines from Make You Feel My Love (yes, the one Adele covered) the songs will only be familiar to Dylan enthusiasts – but the arrangements and performances render them perfectly enjoyable.

The writing is inventive but the plot is tricky. Set in Duluth – Bob Dylan’s hometown – in 1934, it follows Nick (Donald Sage Mackay) and his wife Elizabeth (Katie Brayben). In the context of the Great Depression everyone is struggling to get by, not least Nick who is nearly bankrupt; his unemployed son spends his days drinking and dreaming of being a writer, his adopted daughter is unmarried and pregnant, and he’s struggling to look after his wife who has dementia. Around this family McPherson has written a diverse ensemble from all backgrounds, each with their own troubled back stories.

There’s a lot going on and, even with the surprising amount of dialogue, it’s not always easy to follow. It also gets pretty heavy-going in places – don’t expect to leave the performance with any kind of feel-good glow. Something that is consistently good and enjoyable, though, is the sheer quality of the music. Nobel Prize Laureate Bob Dylan has some great melodies and intelligent, observational lyrics about American society – they fit remarkably well given the show is set decades prior to his most prolific years.

As mentioned the arrangements here are great – there are lots of haunting choral vocals, while the orchestration relies on instruments available in the 1930s – it all sounds very authentic. The songs also reveal a number of incredibly talented vocalists – Gloria Obianyo’s solo is a powerful moment, particularly when she sings in her lower register, while Katie Brayben’s final number is a real wow moment. These two may be the highlights but there are plenty of singers bringing solid vocals to the stage.

Girl From the North Country is an unusual proposition – it’s certainly not a straightforward, easy-watching musical. It’s a bittersweet show with some hard-hitting moments – quite a departure from the festive feel-good shows currently occupying most of London’s West End. But there’s a lot to enjoy here – it’s a smart and classy production, full of wonderful music. It won’t be to everyone’s taste but it gets an awful lot right.