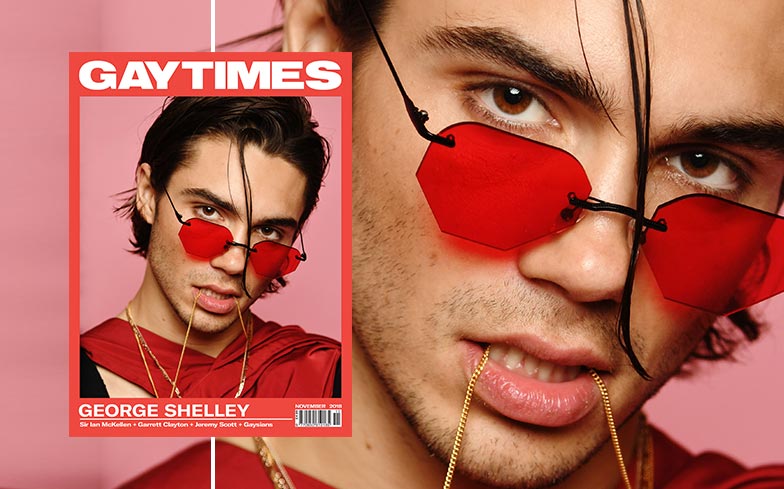 British singer-songwriter George Shelley has opened up about having to keep his sexuality a secret during his boyband days.

In a candid conversation with Sir Ian McKellen for the November issue of Gay Times, the star talks about his journey to self-acceptance while in the spotlight as one-quarter of British group Union J.

George explains that following their time on The X Factor, and during the period where they started to claim Top 10 hits on the chart, he started going out to gay clubs with the group’s other gay member Jaymi Hensley.

“People knew, and then I started going out, Jaymi would take me to these clubs, and people would see me with these guys,” George told Sir Ian. “I’d be kissing these guys on nights out like any other 20-year-old would do when you’re experimenting, and that’s absolutely OK.

“But because of the situation I was in – in the public eye selling records aimed at young girls – I feel like I was made to believe, and made to think, because of the things I was being told and the way I was conditioned, that it would’ve jeopardised the band’s career. And in turn jeopardise my own career.” It would be a few years later that George would address speculation about his sexuality in a YouTube video, after being pressured into doing so when a tabloid paper told him they were going to write a story about it.

But he was still discovering who he was, and didn’t – at that point – want to put a label on it. So he told his fans in 2016 that he was attracted to both girls and guys.

A year later however, George and his family suffered a personal tragedy when his sister passed away following a road accident.

That completely changed the young star’s outlook on life.

“To be honest I think part of it, losing my sister was the most awful thing that has ever happened to me and it really put into perspective how short life is, and how much you have to embrace who you are as a person,” he told Sir Ian. “You have to embrace what makes you, you.

“I’d hate to have any regrets in the future, and to look back and be like, why didn’t you just enjoy it while it was there? “My sister was all about being who she was. She was very passionate about what she did, and she knew exactly who she was and what she wanted in life. I guess I’ve taken that and applied it to my own life.

George is now a proud openly gay man, and wants to use his platform to promote equality, visibility and acceptance for the LGBTQ community.

Asked by Sir Ian what he enjoys most about being a gay man, George replied: “Do you know what, it’s male comfort for me. I love being comforted and protected, and I think it goes back to my childhood of feeling very lost and vulnerable and wanting to hide that side of me.

“But now as an adult I’m able to see that and fill that void. This is really honest, but it’s true and it’s how I perceive it: I love the comfort of a man.

“So I lost my virginity to a girl but that wasn’t until after the whole X Factor experience. When I was in the public eye, that was a scary time for me because I was then all of a sudden not only keeping this secret from my family, but from a lot more people.”