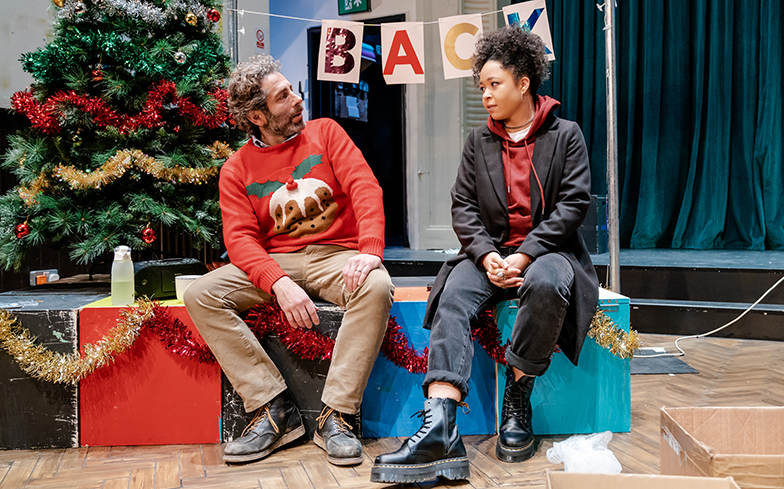 Mike Bartlett’s politically-charged play makes its London debut at the Kiln Theatre a year after opening at the Old Fire Station in Oxford, directed by Clare Lizzimore.

Snowflake’s story focuses on nostalgic Brexiteer Andy (Elliot Levey); a man of simple pleasures, he enjoys old TV shows, pints at the pub, and sees nothing problematic with James Bond. He is estranged from his daughter Maya (Ellen Robertson), a liberal Remainer who walked out on her father shortly after the referendum. Andy is hoping his daughter may return for Christmas and hires a venue for a welcome home party; his preparations are interrupted by feisty stranger Natalie (Amber James) who challenges his world views.

We don’t want to give away much about the plot, as most of what makes it a successful show is how the story develops in the second act. On that note we weren’t huge fans of act one – it’s a rambling and borderline neurotic monologue from Andy which takes an awfully long time. We get the character he’s establishing pretty quickly, and while he’s a good storyteller, it spends about 40 minutes setting a scene which could be done in half that time. In such a short play, the interval feels unnecessary – we thought it would have worked much better as a straight through play, especially if the opening monologue was shorter.

The criticism ends there, however, as act two is excellent. Mike Bartlett – best known as writer of BBC’s Doctor Foster – has created a trio of excellent characters here. What he does especially well is establish a sense of balance – there is no obvious hero. Everyone has positive aspects as well as flaws. It would be easy to give the Remainers the moral high ground and cast the Brexiteer as the villain; but all three are compelling orators who make their cases eloquently and passionately. It makes for some really insightful and thought-provoking moments.

While we won’t spoil the ending, we’ll go as far as to say that it’s a really heart-wrenching moment – we were in tears by the time the lights went out. Snowflake does a wonderful job of showing the human side of the issues affecting our society at the moment, but also touches on broader, more universal issues of the human condition. We really bought into and invested in the characters – after a slightly wobbly start, we genuinely wanted to see how their stories would turn out.

Snowflake isn’t a perfect play – act one is pleasant enough but a bit rambling, and the interval feels unnecessary. Act two, however, is a real masterclass in theatre – the writing does a superb job of really making us care how things turn out. After a so-so start this Christmas-themed play turns out to be a real festive treat.