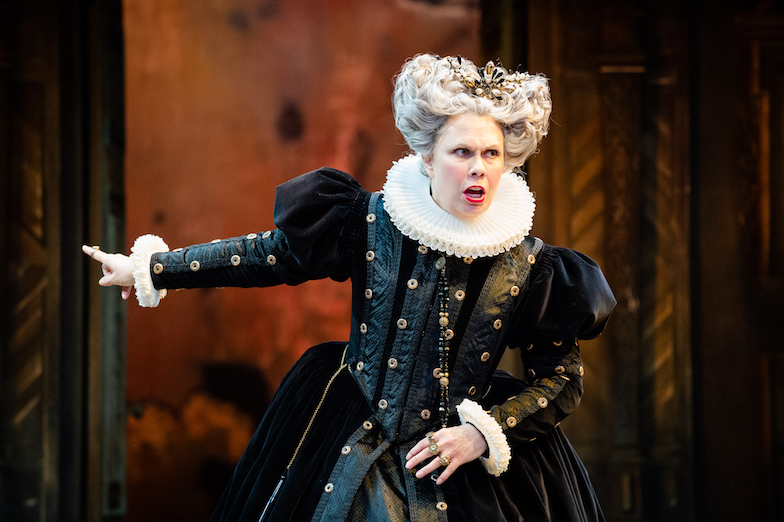 The Royal Shakespeare Company’s Barbican season presents one of Shakespeare’s less-performed comedies, in a new production directed by Justin Audibert.

The Taming of the Shrew has fallen out of favour in recent years and it’s not hard to understand why. Central to the plot is a problematic relationship – the titular shrew refers to free-spirited wife Katherine who has to be “tamed” into obedience by her husband; it’s a tricky plot to navigate for a show which was intended to be a lighthearted comedy. This production tackles the issue with a gender reversal, which breathes new life into the story and makes us look at a lot of scenes very differently – though an abusive relationship is still unpleasant to watch at times, even when it’s a woman who dominates.

Unsurprisingly for the Royal Shakespeare Company, this is a slick and classy production. The set and costume design both look great, while their rather quaint tradition of musical interludes to bookend each act is present and correct, complete with a selection of pleasing and fitting ditties. The actors impress, too; this is a mostly traditional rendition, but there are a few more contemporary moments which provide a refreshing change. There are also some great comic touches – the way Sophie Stanton glides across the stage is a joy to behold, eliciting a giggle from the audience every single time she moves.

The gender reversal may not completely remedy the unpleasant undertone in the main story, but it allows for some other intriguing opportunities. This is most notable in the subplot, involving the former Bianca – now Bianco – who is now eligible to be wed, as his older brother has found a suitor. The various woman fawning over him are rather amusing and their ploys unfold entertainingly, while James Cooney is hilariously vain as Bianco, flicking his hair and striding flamboyantly across the stage.

There’s much to enjoy in this production of The Taming of the Shrew. No, the gender swap doesn’t fix the play’s underlying issue – a manipulative, controlling relationship makes an uncomfortable narrative for a comedy, even when it is a man who is the abused – but it does present a number of scenarios in a thought-provoking new light. It is also a tad longer than we’d have liked – three hours is quite a slog and a little trimming wouldn’t have gone amiss. What we’re left with, though, is an intelligent and often very funny production, which looks and sounds great and is performed by a stellar cast.