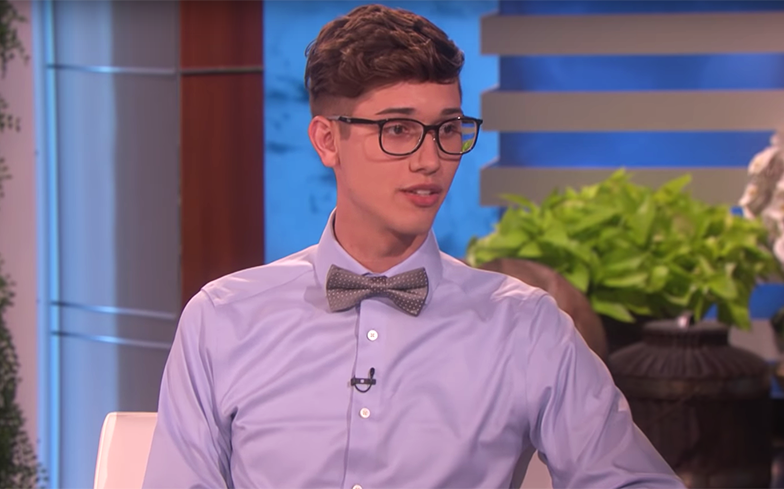 The gay valedictorian who was rejected by his parents for being gay made an appearance on The Ellen Degeneres Show on Monday (10 September).

18-year-old Seth Owen spoke to the Emmy Award winning host about how his parents discovered his sexuality, and subsequently sent him to a gay conversion therapy program.

“In my sophomore year of high school, my dad went through my phone and found out that I was gay,” he told Ellen.

“So they sent me to conversion therapy, and then after a few months, that ended.

“The dangerous part about that is, as a patient, I believed that this health care professional was doing what was best for me.”

After asking his parents if he could stop attending the teachings of their anti-gay church, Owen was forced to leave home and stay with his best friend’s parents.

A few weeks later, after Owen received the financial aid package for his dream university, Georgetown, he came to the realisation that he couldn’t afford to attend.

His former teacher and mentor, Jane Martin, then set up a GoFundMe page to raise money so he could attend college.

The story unexpectedly went viral and his fundraising total skyrocketed to $140,000.

Owen revealed to Ellen that he was going to use the remaining GoFundMe money to create a scholarship for other students.

After hearing his story, Ellen surprised Owen with a contribution of $20,000.

“We’re partnering again this year with Cheerios to encourage one million acts of good, and they’re inspired by young people like you,” she told Owen. “They’re going to help you start your scholarship with this check for $25,000.

Watch the moment below.