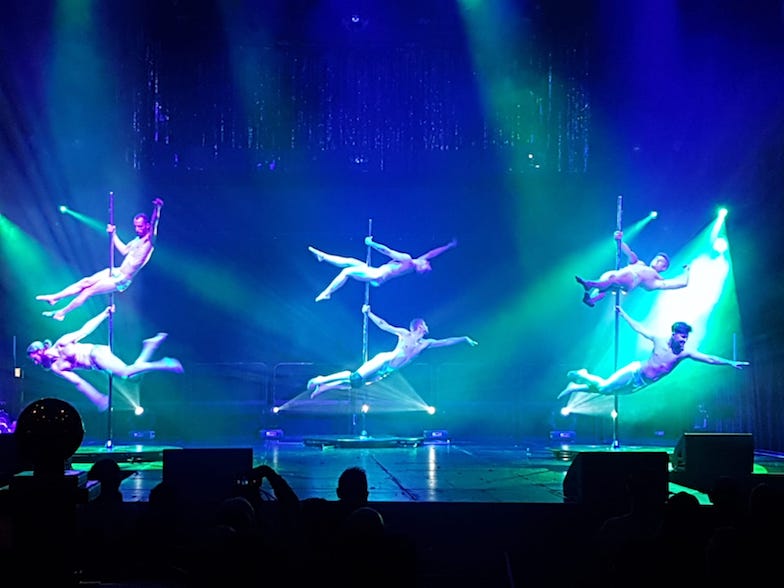 A cast of over 150 members from the dance troupe brought a mix of dance styles, alongside choral work and musical theatre, to the Troxy in their third annual charity gala show.

Over the weekend we were invited to see Out of the Darkness & Into the Spotlight, this year’s charity gala show presented by the Gay Men’s Dance Company. For those unfamiliar, the GMDC was founded in 2015 in London and has now expanded to Brighton. They offer classes in dance, drama, choir, pole dancing, yoga and martial arts, and now also offer all-gender classes. This show brought together members of differing ability levels from a variety of these classes, resulting in an enjoyable and diverse evening of entertainment.

We had a lot of fun with the GMDC. While it does have a handful of impressive moments, including some slick voguing and hip hop routines, it’s not the most technically astonishing show – but to judge it on this criteria would be to miss the point entirely. The enjoyment that the members clearly derive from living their absolute best lives on stage is infectious and we couldn’t help but smile throughout.

While the focus was mainly on choreographed dance routines or vocal work, there were also some genuinely humorous moments, too. Our favourite was a lovingly crafted tribute to Ru Paul’s Drag Race, with various members of the GMDC paying homage to some of the show’s most famous queens.

Although the performance was predominantly an uplifting celebration of LGBTQ+ culture, there was a serious message underscoring the evening. The focus of the event was on mental health, with members of the company paying moving testimony to one of their own who took his life last year. It underpinned the ongoing work of organisations like the GMDC who help create safe spaces and build a healthy, connected community.

The Gay Men’s Dance Company’s variety show had a little something for everyone. Those looking for a polished and technically proficient performance may be better served elsewhere, but the guys in the company looked like they were having a wonderful time and we thoroughly enjoyed watching them do their thing – we felt the audience really bought into the evening’s events, too, resulting in a great atmosphere in the Troxy. Those looking for a fun filled song and dance show would do well to check out the GMDC’s next performance.

Gay Times gives Out of the Darkness & Into the Spotlight – ★★★★☆