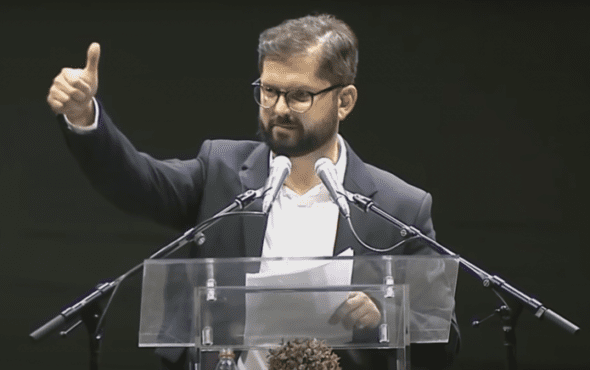 Gabriel Boric has pledged to fight for the “privileges of the few” in a historic win as the country’s youngest president-elect.

On Sunday (December 19), Boric comfortably won the second-round presidential election with 56 per cent of the votes falling in his favour, compared to his right-wing political opponent, José Antonio Kast, who took 44.2 per cent.

The 35-year-old politician, who will be sworn in on 11 March next year, promised a future of change for the country.

“I am going to be the president of all Chileans,” Boric said in a televised interview as reported by Reuters. “I am going to do my best to get on top of this tremendous challenge.”

The president-elect has also proposed an overhaul of the country’s economy calling for a pension model that is not privatised and has higher payouts.

“Men and women of Chile, I accept this mandate humbly and with a tremendous sense of responsibility because we are standing on the shoulders of giants,” Boric told voters.

“I know that the future of our country will be at stake next year. That is why I want to promise you that I will be a president who will take care of democracy and not jeopardise it, a president who listens more than he speaks, who seeks unity, who looks after people’s daily needs, and who fights hard against the privileges of the few and who works every day for Chilean families.”

“Hope always defeats fear,” tweeted Schneider. “We are going to need the same organization and commitment that we showed in this second round (of the election) to defend a transformative government.”

Same-sex marriage has been on Chile’s political cards for some time. The country legalised same-sex civil unions in 2015.

However, same-sex parents were not given rights to adopt children, despite an Inter-American Court of Human Rights ruling for the rights of same-sex couples to be recognised.

In 2017,  Chile’s President, Michelle Bachelet, confirmed plans to propose a bill that would legalise same-sex marriage. The bill, alongside a same-sex adoption bill, was introduced in a landmark moment for LGBTQ+ rights. However, the pivotal bill faced delays as it wasn’t passed before Bachelet’s tenure.

This month a historic same-sex marriage bill was signed into action by President Sebastián Piñera, who Boric will succeed.

Minister of Social Development Karla Rubilar praised the move by Congress for taking “one more step forward in terms of justice, in terms of equality, recognising that love is love.”

Chile’s landmark step in legalising same-sex marriage furthers the rights of same-sex parents and couples which entitles them to welfare rights and opportunities in adoption.

Chile now joins a growing wave of countries in the Americas recognising same-sex rights such as marriage. These countries include Canada, the United States, Argentina, Ecuador, Brazil, Colombia, Costa Rica and Uruguay, and certain states in Mexico.