Freak Show is a story of forgiveness and understanding – review 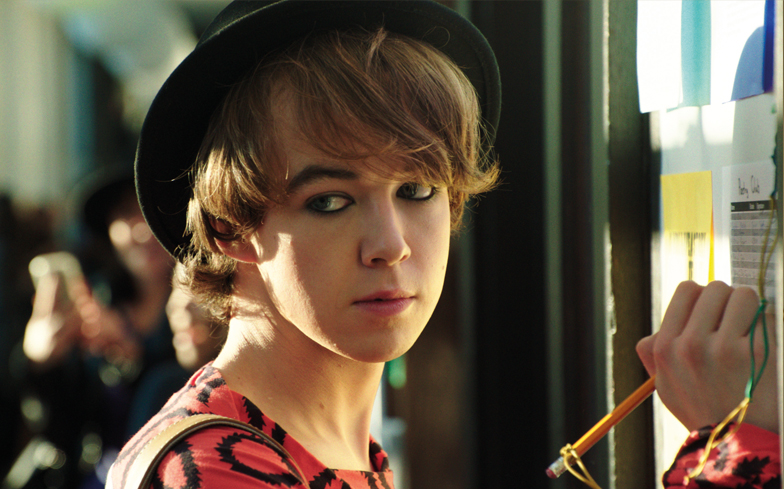 Billy Bloom (Alex Lawther) is a genderqueer teen, raised by his mother, Muv (Bette Midler), a fabulous drunk, idolized by Billy from a young age – taking notes of her style, wigs, and fashion sense and whose struggles with addiction and blurred boundaries affords Billy the freedom to explore his identity free from judgment.

This of course all changes when Muv sends him to live with his estranged buttoned-up father William (Larry Pine). Unphased by this upheaval, Billy, arrives for his first day of school dressed as vintage Boy George.

Billy has no clue what awaits him as he steps through the doors of his new ultra-conservative High School deep in the American South. Immediately labeled a freak and confronted by a wildly homophobic student body, Billy is ruthlessly bullied immediately.

However, he’s determined to make the best of what he soon realizes is a terrible situation. Friendship develops with a fellow outcast whose name he can’t remember (AnnaSophia Robb); and believing he’s finally made inroads with head cheerleader and queen bee Lynette (Abigail Breslin), Billy is instead ambushed by a group of masked students who deliver a horrific attack stopped only by the intervention of star football player Flip Kelly (Ian Nelson). Flip is the only jock to respond positively to Billy’s sense of personal expression, perhaps due to his owns struggles with identity.

Unsurprisingly, after recovering from his injuries and following friendly advice from Flip on “how to fit in”, Billy finally realizes that his hate-filled classmates will never recognize him for who he is while he refuses to fit inside their strict definition of what he’s supposed to be. This inspires Billy to run for Prom Queen, setting him out on a mission to show that there’s ‘a freak in all of us’, knowing that in doing so he will have the opportunity to galvanise his fellow outcasts and bring them out into the light with him. At its core, this is a story of forgiveness and understanding.

Based on the book by James St. James, Freak Show is the directorial debut of Trudie Styler. While it doesn’t break new ground or even take any unexpected turns, borrowing heavily from the playbooks of Mean Girls and Clueless, there are joys to be had – particularly in the performance of its bright lead.

Lawther, best known for portraying the young Alan Turing in The Imitation Game, his work in the Black Mirror episode Shut Up and Dance and the recent Netflix series The End of the F***ing World, truly is the star of Freak Show. It’s a career-making performance from a ridiculously talented and versatile young actor, and his characterisation alone makes seeing this film worthwhile. Lawther handles both Billy’s vulnerability his amboyance with aplomb.

The film suffers from sacrificing screen time on too much “stunt casting” and too many supporting characters who deliver very little payoff and only serve to isolate Billy, disappointingly moving away from the community building of the original source material.

Styler obviously has her heart in the right place, hoping to reach and educate a younger demographic with this plucky tale of persistence in the face of constant prejudice and abuse, but ultimately seems more interested in dressing Billy up than truly exploring the psychological damage that comes from social and familial rejection.

Sadly Freak Show is all style and very little substance, and seems too concerned with selling positivity, never daring to confront the darker areas of Billy’s reality, most notably neglecting to explore the part Muv might have played in Billy’s struggles.