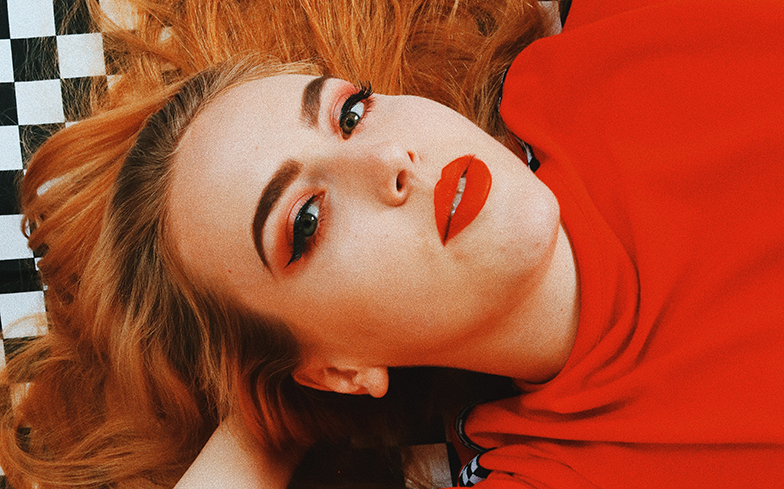 Foxgluvv has premiered her new video exclusively with Gay Times.

The London-based pop artist, born Imogen Davies, puts a queer break-up through the lens of her own unique brand of ‘hungover-pop’ on Fries – think Charli XCX meets the brashness of Lily Allen and Kate Nash, and you’re on the right track.

To celebrate the release of the new clip, we spoke to Foxgluvv about her love of ultimate pop divas Madonna and Lady Gaga, the importance of queer visibility in media, and the ongoing pronoun debate in LGBTQ music.

When did you first discover your love for music?
For as long as I can remember, music has always been a constant in my life and my love for it has definitely shaped me into who I am today. Growing up, I was surrounded by the likes of Led Zeppelin and Pink Floyd blasting from my mom and dad’s personal library, through to pop bangers from the Sugababes and McFly spilling out from my own CD player. I went to go and see McFly live, and that kind of sparked my interest into wanting to delve deeper into the world of music and then eventually, this desire led me to studying music and songwriting up to a masters level… and now I’m here as Foxgluvv, living my gay pop diva truth.

How would you describe your sound?
I’d say that the Foxgluvv sound is significantly influenced by 80s pop, with inspiration particularly drawn from Madonna, and her flamboyant lyricism playing a large role in the development of my songwriting. I’m also a sucker for left-field and alternative pop music, with artists like Charli XCX, Dorian Electra and Kim Petras helping me expand my sonic growth. I’ve previously described my music as ‘hungover-pop’, which to me is the perfect blend of slow-burning but upbeat, sluggish but fun, hungover but pop.

What’s the background story of your new single Fries?
Fries is a situational break-up song, taking place in a fast-food joint and focusing primarily on those awkward post-break-up blues. I wrote this track with my producer, Scott Colcombe, and we aimed to articulate the feeling of how it feels to be dumped without creating a heart-breaking, soul-crushing ballad specifically about the end of a relationship. With that being said, Fries is definitely the anthem you need to push yourself through that end-of-the-road feeling, and get you over that break-up; whether it be romantic, platonic, or somewhere in between.

Is it important for you to be open about your queerness in your art?
Being queer is an incredibly special thing to me, and I truly value my queerness as being not only a part of who I am, but as what I want to be showing to the world. I know that some people have issues with queer artists explicitly advertising the fact that they are LGBTQ and tend to think that it’s some kind of marketing strategy, but to me, I just feel that being authentic to myself and being loud about my pride is an incredible tool to not just be a queer artist, but to show other people that you don’t have to fit into society’s mould to be successful in what you want to do.

Did you ever feel like you should hide your identity when making music?
For a while, I felt uncomfortable with being honest about who I am in music – and I definitely tried to be more nonchalant about my identity within my songwriting. I used to hide behind not using the right pronouns or writing about other people’s experiences, but since coming out and being truly myself, alongside exploring LGBTQ music and artistry, I’ve found a new wave of confidence in my writing that never used to exist.

There’s an ongoing debate about the use of pronouns in music, specifically whether LGBTQ artists have a responsibility to make it clear when their love interests are the same gender. What are your thoughts on this?
I can understand why people might be frustrated if a queer artist doesn’t explicitly mention their identity or use pronouns to be specific, as it might feel from an outside perspective as though societal expectations are outweighing their truth and reinforcing the idea that queer musicians shouldn’t be too queer out of fear of alienating people. However, I really believe that LGBTQ musicians and artists creating their own work and being true to themselves is incredibly admirable, whether it’s smack-bang in your face obvious, or subtle hints here and there, or completely hidden from interpretation. All of those options should be acknowledged and praised.

Who are some of your biggest musical inspirations?
As I mentioned before, I absolutely adore Madonna and her chameleon-esque way of blending into new music as it evolves and the successful and strong persona that she inhabits. I find her incredibly inspiring, and in the same vein I am a huge Lady Gaga fan. Both of these women are not shy about their identities, and have consistently used their platforms as a way to advocate for all human rights whilst simultaneously creating spectacular pop music. I am so in awe of both of their musical talents and I hope that I can mirror their influence in some way.

Is there an album on the horizon?
I’ve been working really hard with my producer on creating loads of new material. I don’t know about an album just yet, but I’m super excited for the next era of Foxgluvv and whatever form this material will take.

Fries is available to stream on Spotify and Apple Music now.