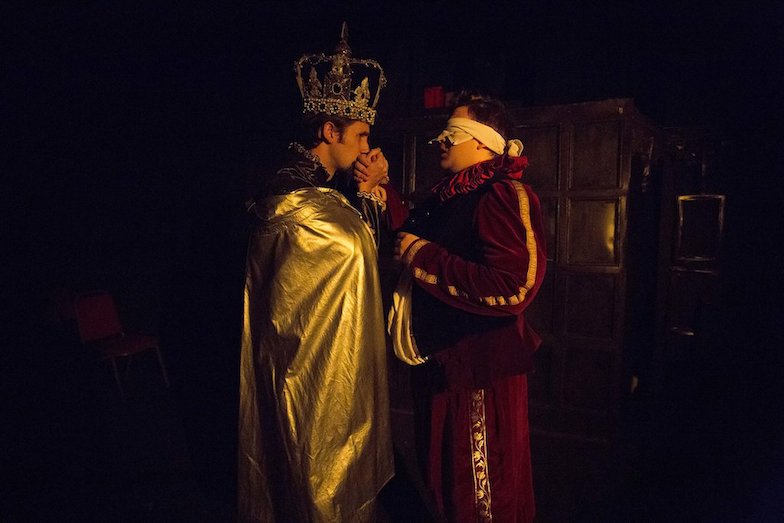 The year is 1603, and at the rural home of the Countess of Pembroke, William Shakespeare and his troupe of actors are preparing for a special production of As You Like It – to be performed before the new king himself, James the First.

While ostensibly a period piece, this engaging oddity is peppered with appealing anachronisms – such as the hard techno soundtrack, and a king’s bodyguard adorned in modern leather fetish gear. This blending of worlds works extremely well and creates a rich and satisfying aesthetic that serves as an ideal canvas upon which to sketch this quirky tale.

There are plenty of queer shenanigans going on here – from the young male actors who are considered by some to be no more than ‘rent’, to the all-powerful monarch – a juicy portrayal by Tom Vanson – who takes more than a passing interest in the boys. Also, intentional or not, James King’s show-stealing performance as the anthropomorphic dog Chop has more than a whiff of the ‘puppy-play’ scene to it. James goes all out to give us an extraordinary interpretation of a verse-spouting canine cutie. Superb.

Related: Love, Simon, 120 BPM and The Happy Prince among gay films to play at BFI Flare

Ian Hallard, as the Bard himself, serves us a nuanced portrayal of the wordsmith as a craftsman under pressure. Temptations to play up any Shakespearian stereotypes are resisted and we view him as a very real man just trying to get on with his job. This is a role that we would be very happy to see Ian take on again – perhaps in the rumoured pair sequels that author Robin Hooper is said to have secreted up his sleeve?

There’s a standout turn from Lewis Chandler as the flamboyantly gay boy-actor Alex. Lewis minces and pouts with charming precision, and then demonstrates that he’s also capable of nailing the dark dramatic stuff, as his character is forced to face the appalling consequences of an act of jealousy – a beguiling performance with perfect polarity.

The rest of the cast are uniformly excellent – with Thomas Bird deserving a special mention for handling the disability inflicted upon his character, Rob, with aplomb. And there can be very few in the audience whom didn’t have at least a small yearning to be petted by Jack Harding’s hunky bodyguard in the manner that he pets Chop the dog.

This is an unusual piece but director Matthew Parker has ensured that there are equal amounts of style and substance – both found here in abundance. If, like us, you feel perfectly at home in a world full of Shakespeare, leather, and techno – then this is the show for you. It probably won’t be loved by everyone, but it was by us. If you’re looking for something different then Foul Pages is well worth a sniff.