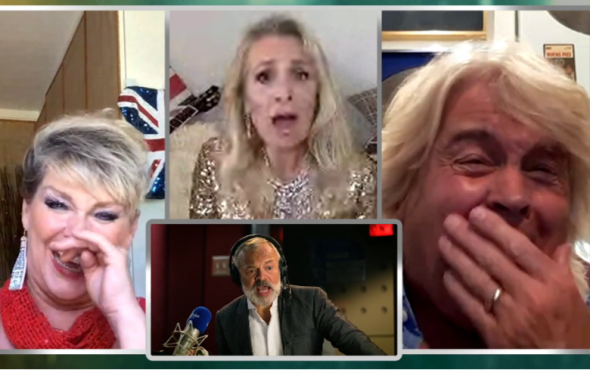 We’ve all recently been enthralled with Netflix’s Eurovision, Will Ferrell’s take on the legendary song competition, and now Netflix UK has gathered legendary stars from the show’s past to react to the film.

In the 12-minute video, Blue, Joe and Jake, Scooch, Conchita Wurst, Courtney Act and Buck’s Fizz reacted to some of the highlights of the film, including Lars stuffing himself, the endless cameos of Eurovision contestants and the performances of Lars and Sigrit.

At one point, Blue’s Lee Ryan asks “Why didn’t we get a shot to be in this movie?” to which Simon Webbe quips back “Because we got beat by Jedward.”

And during the scene with past Eurovision contestants, Joe Woolford says: “I feel like everyone who was in the contest is there and there’s me and you watching along on our laptops.”

Although a highlight from that scene is Courtney’s scream when she realises that Conchita managed to grab a cameo, and Courtney losing her ‘gay card’ after getting the lyrics wrong to a Cher song.

Many of the stars also reflected on how accurate parts of the film were, especially with capturing the overall mood of the competition and its sometimes cheesy entries.

As the video ends, Mike Nolan from Bucks Fizz quips: “They may make another one of those, maybe a Part 2, and we might do that one,” before being reminded that the band feature in promotional material.

You can watch the full video either here, or below.