Fiddler on the Roof is intimate, immersive, incredible – review 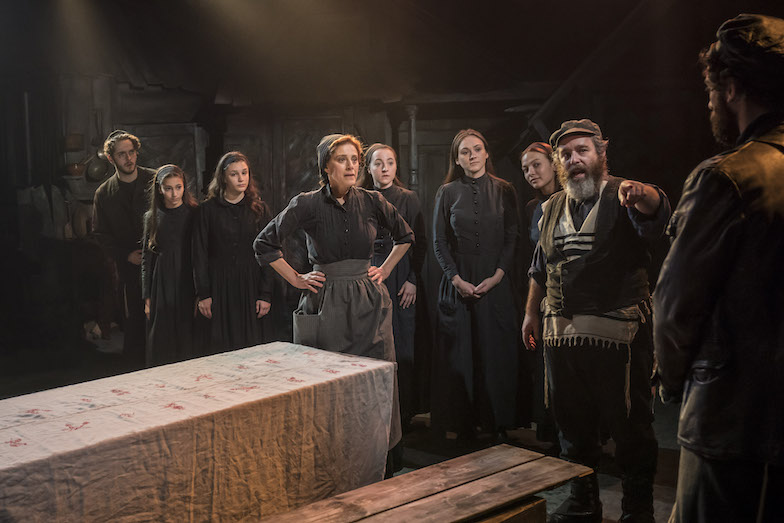 Trevor Nunn directs this magnificent revival in the intimate setting of the Menier Chocolate Factory.

Fiddler on the Roof is a musical which needs no introduction; it’s much-loved and often staged, featuring numerous well-known numbers. Some productions have been criticised over the years for bordering on the overly sentimental or cliché but this rendition suffers no such issues. Trevor Nunn’s is a bold yet intimate, exciting yet traditional, engaging new staging. It’s difficult to find fault here – the acting is superb, the routines are beautifully choreographed and the music is, of course, fantastic.

From the moment we walked into the theatre we knew it would be an immersive experience, the thrust staging ensuring each audience member was afforded an excellent, close-up view of the action. Nunn has transformed the space into a bustling village, with sights and sounds that made us feel truly involved.

This production is absolutely not afraid to explore some of the darker elements of the story, which feels timely given the recent alarming rise of antisemitism. While some performances of Fiddler cater for a more family-friendly audience, this one deftly considers both the light and dark elements of the text. The raucous wedding party scene, which is brought to an abrupt halt by the arrival of a pogrom, is particularly sobering.

The more thought-provoking elements contrast wonderfully with moments of unbridled joy; the song and dance numbers are genuinely superb, with some absolutely first-rate, traditional choreography. We particularly enjoyed the actors dancing their way across the stage whilst balancing bottles on their heads.

Given the small space, the show features a surprisingly large cast of actors and musicians – there are far too many talented performers for us to name them all. Of particular note, we were taken with Andy Nyman’s masterful Tevye, whose humour was infectious – yet he still managed to convey the seriousness of the character. Judy Kuhne also shone as Golde, astutely observing the complexities of her relationships with her husband and five daughters.

Fiddler on the Roof is one of those genuinely rare and special productions which just seems to get everything spot on. The look, sound and feel of the performance just felt so right; we’re running out of superlatives to describe the quality of the acting, singing and dancing.