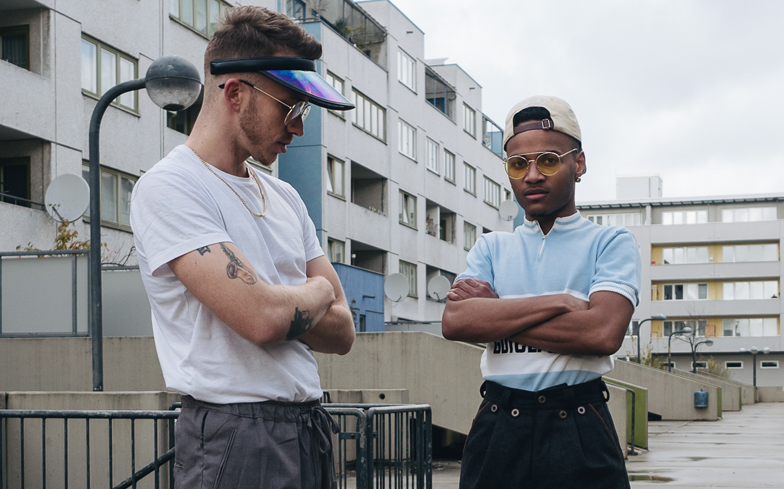 The warmer temperatures may be dawning on us for another year, but it doesn’t mean the summery sounds need to go with it.

Say hello to FHAT – the unapologetically queer music duo consisting of Aaron and Sedric – who treated fans to their brand of chilled alt-R&B in the form of their recent single Pleasure over the summer.

The two relocated from Los Angeles to Berlin a few years ago and quickly found themselves forming a new musical partnership with influences that range from Mura Masa to Outkast.

As they release their new single ONATD (One Night At The Disco), Gay Times caught up with FHAT to find out more about their formation, their experiences as openly gay musicians, and what’s in store for them next.

First up, how did you come up with the name FHAT?
Aaron: We were in a session with a producer from London called Fabich, and we had worked together on a few songs and they all had very phat basslines, and very phat melodies, so then I was then like, ‘We should call ourselves FHAT with an F.’ And it just kind of happened.

How did you two guys first meet each other?
A: We met in Los Angeles about two years before we became a group at this castle party in the Hollywood Hills. It was very LA. Very mysterious, dark rooms, food, booze, things going on that we, y’know, wouldn’t tell mom about.

When did you decide you wanted to work together musically?
A: When we created the first feature called Back To Life, we had been friends for probably a year and a half at that point. We had never really worked together on music. We’re both singers and had been doing music for years, and we never really cross contaminated that until we did this session. It was kind of magical. It was our friendship in a song. So Back To Life happened and we were like, ‘This could be a thing.’ People responded really well to it, so we decided to make a project that we can put ourselves into, and always remembers to put positive good vibes, acceptance, love, and good musicianship into the world.

Your single Pleasure was perfect for the summer – where do you get your inspiration for your sound?
Sedric: There’s a lot going on in that song. I’d say there’s even some early 00s influence. There’s a bit of Ty Dolla $ign’s influence. A bit of Janelle Monae influence. But the strongest inspiration came from, again, our friendship. At this point we’ve been living in Berlin for about a year, sharing a mattress on the floor in the living room at my friend’s place!
A: It was a struggle to get to where we were going, but I had just signed a publishing deal with Universal Germany writing songs all the time for other artists. Sedric was learning about the publishing side of all this because it’s such a huge business, and artists tend to sometimes forget that. The song really represents us not minding the hard times of our friendship because it always ends with a really good time. We always try to bring the best out of each other in all situations.

You’ve been described as “unapologetically gay” so how important was it for you to be open about that from the start of your career?
S: I think the thing that we wanted to bring to the forefront was the idea of just having fun. We didn’t put any labels to it, we didn’t try to put a genre to it, and we didn’t want to stifle each other’s creativity. We both come from very different worlds, and we kind of meet in the middle sometimes. We are interracial and we are gay so we should probably talk about it sometimes. Not too much, but enough to let people know it’s okay to be yourself, have fun, be crazy, and make great music.
A: From my side, I come from a very conservative family. My whole life I was always kind of ashamed of being gay and hiding it a little bit. I went to a lower class high school and it just wasn’t accepted to be like that. Specifically with claiming publically that I am gay was something that I always struggled with. But finally through the FHAT project I feel like I’ve felt confident in myself and in us together as being ourselves through the music. The music resonates more with people.
S: I don’t think we’ve actually put our sexuality into any of our other music. Of course you’ve written love songs, but you’ve never specified if it’s about a guy or about ourselves.

What were each of your coming out journeys like?
S: My brother kind of outed me to my mom! This one day she just came in and sat on the edge of my bed and was like, ‘Y’know Sedric, I’ve been doing some thinking’ – and at the time I was dating a lot of girls – and she was like, ‘are you bisexual?’ We just got quiet for 10 seconds and then she just started screaming at me. It was just shameful. We didn’t talk about it for a while, but now we’re okay.
A: From the age of 17 I was very, y’know, telling people I was gay. I told my dad right away. From very early on I didn’t want to lie to people. I just didn’t like living with hiding it. I was 17 and made a big dramatic scene when telling my dad. He was like not so much cool with it for about a year. He’s still not super gung-ho, and we don’t really talk about it, but everyone kind of knew.

What inspired your move from LA to Berlin?
A: So I am actually half German, and I speak German. But I’ve never lived here – I only travelled a few times when I was younger. I released a song with some producers from Dusseldorf and it did really well in the Spotify world. My name is not on it – it’s just kind of out there. Then they were like, ‘That was really good – you should come out as there’s lots of producers here that like your voice.’ It was kind of in the dance music scene. So I came to Berlin for two months with the thought of moving back to LA, but I fell in love with Berlin. It’s such a vibrant city. In the two months I was here, I met so many people, talked about publishing deals, met tonnes of musicians and producers and managers, and I was like, ‘This never happened in LA because it’s more of a closed… you have to know people, you have to be rich, you have to be famous…’ Sedric came to visit me a few times, he got a cool job that got him a work visa for two years and it just seems like we’re meant to be here for some reason. It’s close to London and we were there seven times last year in writing sessions.
S: For me, it started with me sitting in Aaron’s bedroom in LA and I booked a ticket to London with the idea of going to live there for a year to see what it was like. I went for a few weeks and then came to visit Aaron here in Berlin and I just really loved it. I love the atmosphere, the parties, and I kept coming back to visit. I started dating this guy, and so then I just decided to move here. I really started to take my music seriously as a commodity to sell.

What are the biggest challenges that new music artists are facing at the moment?
A: I think the biggest challenge is keeping up with how quickly things are changing, technologically speaking. Every week there’s a new distributor, a new format of connecting with people, and Spotify seem to be shifting back from the playlist-run thing to them now trying to edit everything that comes through. So it’s hard trying to keep with how to distribute it. And also, making content on social media that is effective.

So what’s next for you guys?
A: Our new single ONATD (One Night At The Disco) is so sexy and weird and vibey. And then the other thing I wanted to talk to you about was our music video for Pleasure which will be out by the end of the month, which features Olisa Odele from Chewing Gum. We flew him here for a week and we had a blast. It’s shot like a short film. We won’t give too many details away, but it’s going to be amazing.

Finally, who would you say are your LGBTQ icons?
S: Even though he wasn’t gay, I want to say Prince. He’s like the perfect balance of masculine and feminine energy and I really respect that.
A: There’s so many people that we love. I was born in Pittsburgh and I would say that one of my biggest icons is Billy Porter. I’ve known him since I was 16 years old – he’s one of the first people who introduced me to the gay scene in Pittsburgh. To see him go from Broadway star back in the 80s, to struggling because he was so openly about his sexuality and society wasn’t really there, but he just kept pushing. The he wrote Kinky Boots with Cyndi Lauper, and now he’s in Pose, so just to see his journey, he really is an icon. It really brings tears to my eyes.