Fat Blokes is an intelligent act of queer rebellion – review 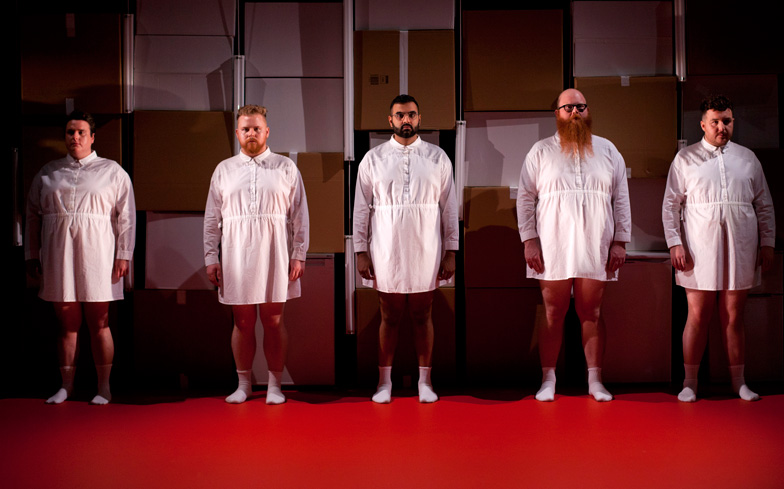 Scottee’s new show, which has opened at the Southbank Centre, is angry and enjoyable in equal measure.

“What’s so funny?” Scottee’s cutting opening question is absolutely fair and sets the tone for the show. Fat Blokes begins with a large, bearded, bald man dancing centre stage, which elicits giggles from the crowd. This is a show which challenges its audience’s attitudes and preconceptions. It asks why a liberal theatre goer, with an inclusive attitude, would still tut if an overweight person were to sit next to them and take up more than their fair share of space.

Fat Blokes asks a lot of questions. It considers why fat is seen as bad, undesirable, an illness; why fat is always the before picture, never the after picture; why fat is seen as something wrong that needs changing and never the aspiration, the goal. There’s a particularly effective moment where Scottee covers each performer’s head, mimicking the faceless, overweight torso image we’re all so familiar with from numerous obesity news stories.

Over the course of 75 minutes Scottee and his four fellow plus-sized performers tell us their individual stories. It’s sometimes uncomfortable hearing their testimony relating to ritual humiliation, daily bullying at school, violent attacks in Soho. Sometimes it’s endearing, sometimes there’s a positive message, frequently it’s very tender and poignant. These are all very normal men telling their genuine stories; some of them have no stage experience; one proudly announces his day job is in financial services consultancy.

Interspersed throughout the show are several dance numbers, impressively choreographed by Lea Anderson. There are some humorous routines involving bananas and Diet Cokes during the performance and some genuinely impressive physical routines towards the end. It’s a show that makes space for and celebrates fatness – these people aren’t hidden, or sidelined as the fat best friend – these fat blokes are front and centre, making themselves as visible as possible.

While Fat Blokes has a serious message, there are plenty of humorous and enjoyable set pieces; it’s also a show which has a positive undertone and celebrates the beauty of these unconventional men. It’s an intelligent act of fat, queer rebellion – not an easy or straightforward night at the theatre by any means, but still one we’re happy to recommend.