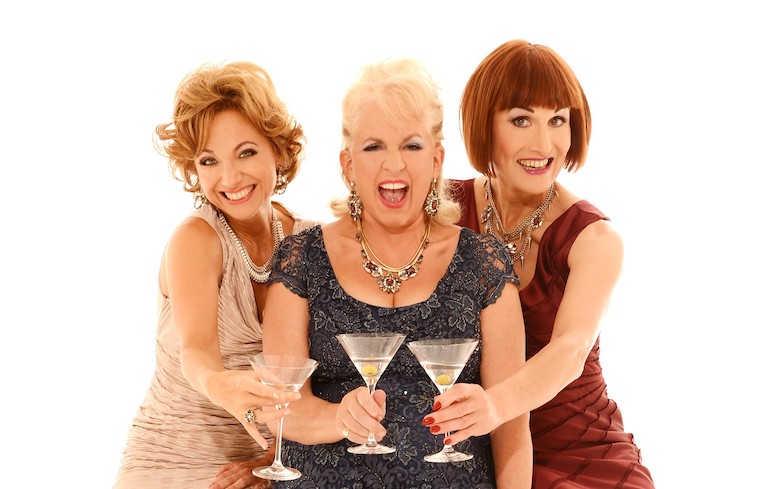 The renowned cabaret trio bring their Christmas at the Southbank show to the Queen Elizabeth Hall, directed by Paul Foster.

Fascinating Aida are of course best known for their viral video Cheap Flights, recounting the pitfalls of trying to find a flight for 50p. This show, which features both classic songs and new material, includes their signature track which unsurprisingly receives a great response – but impressively, it’s only one of many great moments. Since forming in 1983 they have amassed a superb back catalogue of music, much of which has been updated to feel contemporary, sitting seamlessly alongside the new material.

What’s surprising about their act is just how topical and engaging everything is. They may have changed lineup a few times, but this particular trio has been working together for over 15 years – so while we expected everything to be very professional and slick (it is), we weren’t expecting the material to be so fresh and engaging. Whether discussing the validation we seek through Instagram likes, worrying about climate change, the spiralling costs of HS2, or even poking fun at Zach Goldsmith’s peerage – which took place mere days before the show! – a whole host of issues are covered in a series of hilarious pastiches.

While they bring some powerful political messages to the Southbank stage – there are plenty of intelligent swipes directed at Boris and Brexit – we were most impressed with the brilliantly-realised and positive message of Prisoner of Gender, which tells Adele’s story as a trans woman. We won’t spoil the song at all but it treads the fine line between entertaining and touching brilliantly; it also features probably the best rhyme for the word ‘puberty’ we’ve ever heard. Although it was nowhere near the end of the show, it deservedly received a standing ovation from a sizeable chunk of the audience.

While that was an obvious standout moment, it’s difficult to distil a show with so many highlights into a few short paragraphs. Their song So Sorry Scotland has now become So Sorry Ireland, lamenting the difficulties of the border situation in a post-Brexit world. Lieder pokes fun at what performers can get away with if they pretend to be German; while This Ain’t No Hokey Cokey Anymore is an ode to lovemaking for couples of a certain age. It owes an obvious debt to Victoria Wood – it’s all very Ballad of Barry and Freda – but that of course is no problem at all. It’s utterly hilarious.

This isn’t a completely perfect show – each act contains one or two songs that feel a bit pedestrian; in a lesser production they wouldn’t be as noticeable but sandwiched between great numbers they feel quite underwhelming. But for the most part this is excellent; Fascinating Aida are very funny indeed, and when they get it right – which is the vast majority of the time – it’s brilliantly entertaining stuff.