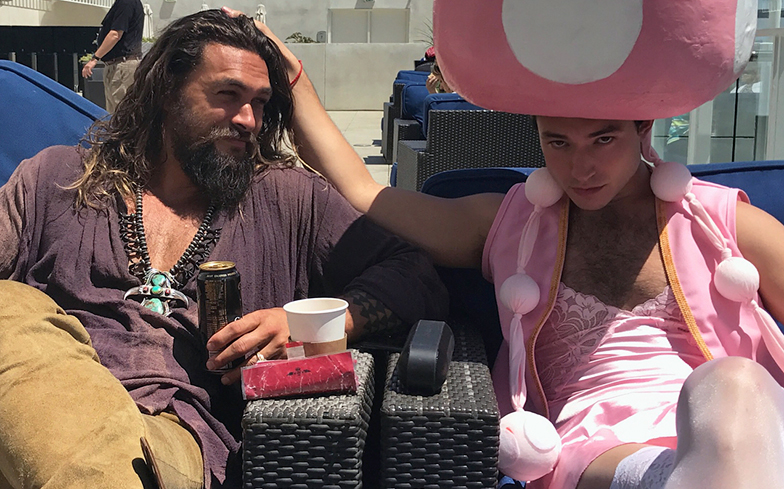 Could we love Ezra Miller any more than we do right now?

The proudly queer actor and Sons Of An Illustrious Father band member made sure his entrance to San Diego Comic-Con was one to remember when he appeared on a panel for the upcoming Fantastic Beasts sequel, The Crimes Of Grindelwald.

Alongside fellow franchise stars including Eddie Redmayne and Jude Law, Ezra certainly stood out as he dressed up as Super Mario character Toadette, who made her debut appearance in Mario Kart: Double Dash!! back in 2003.

Ezra posed for photos with celeb friends like Jason Momoa and Eddie Redmayne, before later joining his Sons Of An Illustrious Father bandmates Josh and Lilah, who were both dressed as Toad from the Super Mario series.

It’s the latest in a string of brilliant costumes Ezra has worn to Comic-Con events. Last year, he dressed up as Edward from hit anime series Full Metal Alchemist, and the year before he transformed into Lord Of The Rings favourite Gandalf.

Naturally, the Toadette costume went down just as well as his previous ones with fans on Twitter.

My sexual orientation is Ezra Miller as toadette. pic.twitter.com/VT2TZFgAv9

Ezra Miller is truly a gift from gods and I am so damn grateful pic.twitter.com/5Qb88R1o3D

Ezra appeared on the cover of Gay Times for our June issue this year, where he spoke about his band Sons Of An Illustrious Father, and teased the future of his Fantastic Beasts character Credence.

When asked about the parallels between wizards being forced into hiding and LGBTQ people having to stay in the closet, he said: “I was drawn to the role for a wide plethora of reasons, and that was definitely one of them.”

The actor’s lips remained sealed when we dug for any hints of how the next instalment will play out, but he did offer a little insight into the future of Credence and how he deals with the oppression he faces.

“It will definitely be the continued exploration of that character as he progresses through other chapters of his life,” he said.