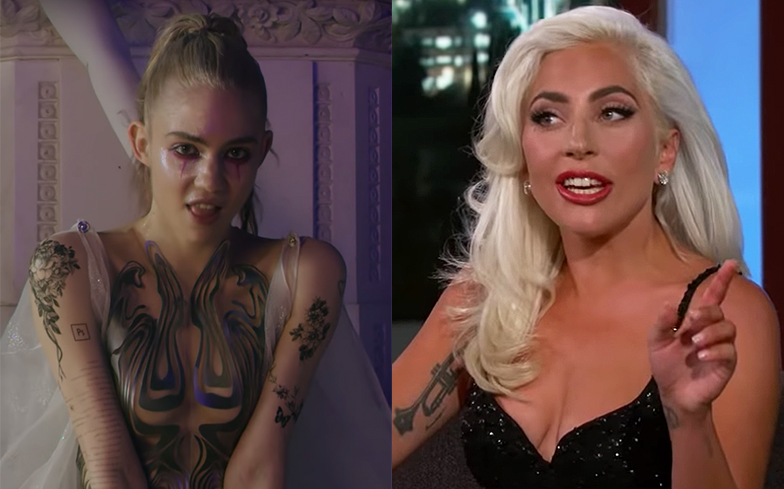 The tracklist contains song titles such as Stained, Otherside, Cool for Chaos, Distortion, All About You, Hourglass, Flames, Hysteria, Black Velvet, Tainted Love, Blood in the Cut, Opulence, as well as a song called Real Boy on which Grimes features.

Its cover sees a nude Gaga with robot-esque headgear and the star’s name in futuristic metal text.

Although it’s clearly fan made, fans have assumed it’s legit because the Canadian singer-songwriter has been working with Gaga and BloodPop for her comeback. On one of Grimes’ recent pictures BloodPop commented, “Cool pic where is lg6?”

She responded with “fuck you” and when a fan asked her where ‘LG6’ is, she said it’s “on BloodPop’s computer”.

“I don’t understand is she allowed to do that? Is that real what?” said one flustered fan on Twitter while another wrote: “What’s going on here? @ladygaga @Grimezsz are you playing with our desperate heart?”

Gaga offered an update on the long-awaited album yesterday on Twitter. She tweeted an emoji crying face alongside the caption: “Bloodpop: you’re the one who wanted to be a pop star.”

The album will be her first since 2016’s Joanne, which spawned singles such as Million Reasons, Perfect Illusion, John Wayne and the title track. It received positive reviews from critics and debuted at number one on the Billboard 200.

Last year, she released a collaborative album with Bradley Cooper for A Star Is Born, which topped the charts in multiple countries. Its lead single, Shallow, became Gaga’s fifth US number one and received an Academy Award for Best Original Song.

We recently ranked all of Gaga’s albums from worst to best – see where we placed Joanne and A Star Is Born here.