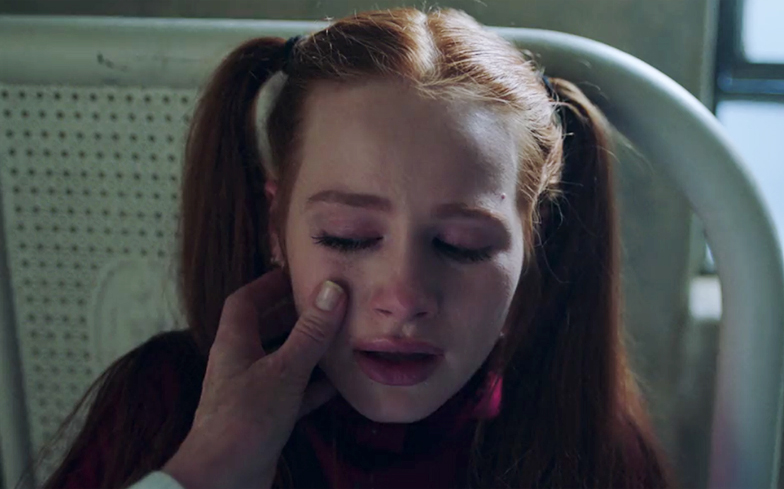 Since the show’s debut, the cheerleader and self-proclaimed ‘Queen Bee’ at Riverdale High has been to hell and back. Her father murdered her brother Jason, which led to a suicide attempt, and in season two, she was drugged and (almost) sexually assaulted by trouble-making bad boy, Nick St. Clair.

So when Cheryl came out as bisexual and embarked on a romance with Toni Topaz (Vanessa Morgan), fans *finally* thought Cheryl would have a positive plot line, and were excited at the prospect of another LGBTQ romance. But the latest episode saw Cheryl sent off to Sisters of Quiet Mercy to have the gay stripped away by her mother, before she even had the chance to properly explore her sexuality. “Oh you poor child, there’s nothing to be afraid of,” says Sister Woodhouse. She then refers to herself in the third person, telling Cheryl: “Sister Woodhouse is going to help you. Yes, she’s going to rid you of all those naughty demons, the ones making you think such awful, unnatural thoughts.

“Today, you must rest. Tomorrow, the real work – the conversion – begins.

The storyline, and the whole creepy encounter with Sister Woodhouse, has left viewers divided. Many fans are furious that one of the only queer characters has been punished for her sexuality, whilst some believe the show is trying shine a light on conversion therapy.

Take a look at some of the reactions below.

radmuffin: I’m literally SO uneasy about Cheryl being sent to conversion therapy after coming out and… https://t.co/bJh8mKUnZg

Since Toni and Cheryl are supposedly not #queerbait, and Cheryl is supposedly queer and has since come out, what do the producers do? Put her in conversion therapy. That's right: the queer character is punished.

So what are your thoughts? Are the writers trying to educate viewers, or are they hellbent on making Cheryl Blossom’s life a misery? Let us know how you feel about the issue in the comments!

Related: A major character just came out on Riverdale.