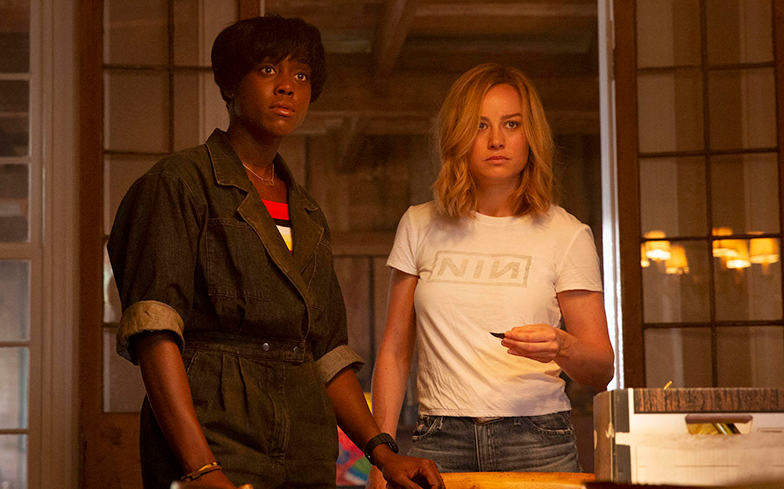 “I actually just saw a Marvel movie with a gay love story and it was called Captain Marvel.”

Marvel fans have called for Captain Marvel to be gay after noticing some serious queer undertones in the film.

The long-awaited blockbuster received its worldwide release last weekend and received highly positive reviews from critics, especially for Brie Larson’s performance as the title character and for its incredible de-aging of Samuel L. Jackson.

In its opening weekend in the United States, it grossed a massive $153 million and launched with $455 million worldwide, meaning it’s already the second biggest film of the year.

So back onto the queer undertones: in the film, Captain Marvel, aka Carol Danvers, discovers how she became one of the galaxy’s mightiest heroes after Earth is caught in the centre of a galactic conflict between opposing alien races.

During her mission to find out more about her past, she comes across fellow Air Force pilot, Maria Rambeau (Lashana Lynch), one of her oldest friends. Marie is a single mother, and we discover that Carol helped raise her daughter.

Fans were quick to ship them both as a couple, even though their romance wasn’t explicitly portrayed on screen.

However, because the film boasted several queer undertones – and Carol didn’t have a male love interest (thank god) – the LGBTQ community has declared them both as queer, and we are so here for it.

“Captain Marvel was fantastic!  I was not expecting the love story, what a lovely surprise Marvel! So nice to see a canon married queer couple,” said one fan, while another opined that the film had “Strong Independent Queer Woman Energy”.

“Captain Marvel is def queer and you can fight me all you want but you won’t convince me otherwise,” said another.

my gf and i whenever there's a very subtle gay hints and lines in #CaptainMarvel yes we like crumbs like that pic.twitter.com/GyxIbfRW0n

Carol and Maria invented being gay I said what I said#CaptainMarvel pic.twitter.com/nMdsYPxQT1

Carol and her bff are gay. I mean, they raised a child together. #CaptainMarvel

I actually just saw a Marvel movie with a gay love story and it was called Captain Marvel. https://t.co/CaqQ7aea7w

#CaptainMarvel is gay and that's the tea pic.twitter.com/W5gRNKXxAF

I saw captain marvel. It was great. I would rate it: gay undertones for sure. pic.twitter.com/L4W2M4lwmp

the phrase “Auntie Carol” being lobbed at brie larson in ‘captain marvel’ was a glitch in the gay matrix. reality as we know it in the lesbian extended cinematic universe has been fractured

Give me this full, gay af scene please! #CaptainMarvel pic.twitter.com/BHFMG0pniR

She just watched Captain Marvel and she might just be gay.

Carol Danvers’ and Maria Rambeau literally were glued to each other’s sides throughout their time in the airforce. They flew together, went to the bar together, did karaoke together, and even raised a CHILD together before Carol died. Fellas is it gay #CaptainMarvel pic.twitter.com/vkxvd48505

captain marvel was so good and GAY pic.twitter.com/TR2TRwFYgv

Captain marvel was fantastic!
I was not expecting the love story, what a lovely surprise marvel! So nice to see a canon married queer couple. ☺️

Captain Marvel was good stuff. Loved the soundtrack, so many pleasant memories. Loved the nineties throwbacks too. God, I miss the grunge vibe. Girls in distressed jeans and flannels around their waists are 👌

Also, huge queer vibe from Danvers and her friend.

Just got back from Captain Marvel and I am catching rays from that Strong Independent Queer Woman Energy™ everyone was talking about. God Bless.

Captain Marvel is def queer and you can fight me all you want but you won’t convince me otherwise. Thank you for coming to my lecture.

yeH captain marvel is for the queer folk 💖💖💖

Last week, a top Marvel executive said it’s time for a gay superhero in their movies.

It was recently reported that an upcoming movie from the blockbuster studio, called The Eternals, will feature the first openly gay superhero to star in a big-screen Marvel outing, a move which is long overdue.

During the Los Angeles premiere for Captain Marvel, production chief Victoria Alonso told Variety that “the world is ready” for a gay superhero, but stopped short of confirming the rumours of The Eternals featuring a gay lead.

Alonso also reiterated Marvel’s commitment to diversity, adding: “Why wouldn’t we be?

“I’m so passionate about this I’ve got to tell you. Our entire success is based on people that are incredibly different. Why wouldn’t we? Why would we only want to be recognised by only one type of person?