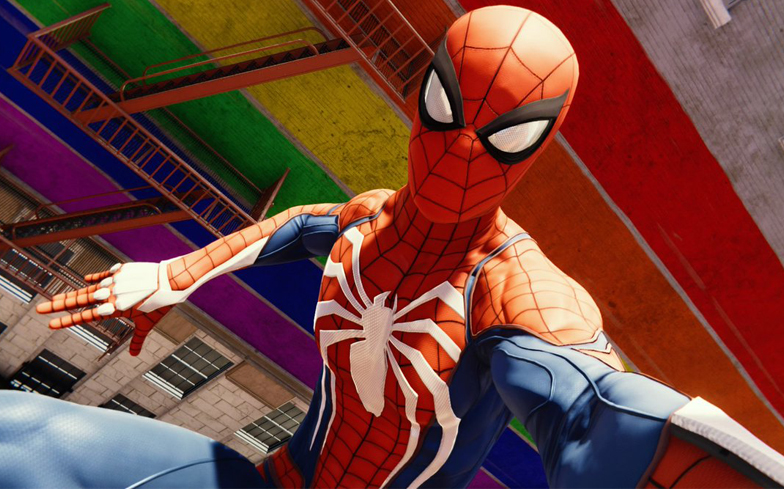 You couldn’t scroll through social media this past weekend without the sight of Spider-Man web-slinging all over New York City in screen grabs from the superhero’s fantastic new outing on the PlayStation 4.

But amongst all the snaps from Marvel’s latest console offering, fans are showing off a rainbow-colour gems they have discovered.

Dotted throughout the virtual city are a number of Pride Flags, and fans are trying to track them all down to have Spidey pictured with them.

The Pride Flag was first spotted by writer Saladin Ahmed, who shared his snapshot of the flag on Twitter and triggered a search for more LGBTQ-themed Easter Eggs within the game.

Wow. I stopped to perch on a building in #Spidermanps4 and looked over and saw this.

Thinking about all the 12-year-old kids who will be playing this game and seeing this in towns where it's not safe to put that flag up. pic.twitter.com/QGr1Q7QrxZ

“Wow. I stopped to perch on a building in #Spidermanps4 and looked over and saw this,” he wrote, with his perfectly-angled picture of Spider-Man next to the Pride Flag.

“Thinking about all the 12-year-old kids who will be playing this game and seeing this in towns where it’s not safe to put that flag up.”

He added: “Not saying that it’s some radical move, but just as someone who came up 30 years ago playing Spider-Man video games with boys who constantly hurled homophobic insults at each other IRL this is…different.”

Was gonna go stop a crime but I saw a pride flag #SpiderManPS4 pic.twitter.com/vTjTAnb6PA

And as we mentioned earlier, it isn’t just the one flag. There are a handful (that we know of so far) dotted around the vast virtual playground within the game.

What’s more, the rainbow colours can also be spotted painted underneath some of the city’s flyovers, as well as on the side of an entire building.

I had to stop and appreciate this moment. pic.twitter.com/BmB5PWuYos

Naturally this small inclusive gesture has been welcomed by the gaymer community, with one stating on Twitter: “Getting Spider-man for the sheer fact there’s a photo mode and pride flags.”

Marvel’s Spider-Man is out now exclusively on the PlayStation 4.

Related: Marvel’s Spider-Man on PlayStation 4 sees the web-slinging hero like never before