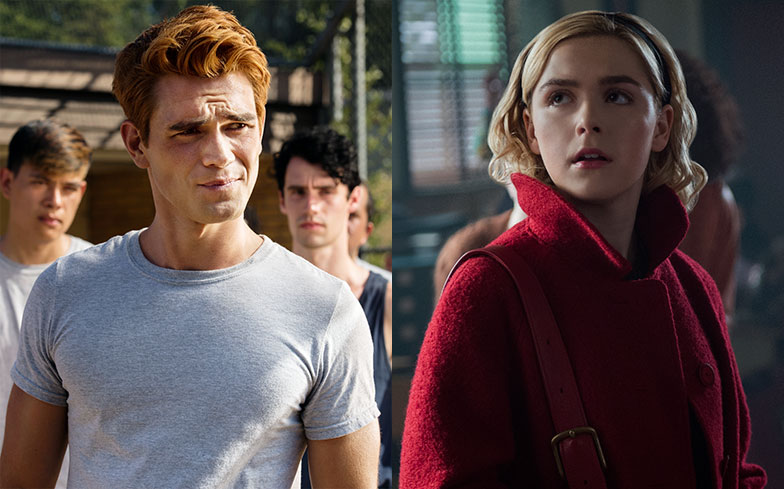 Is Archie Andrews about to meet Sabrina? Fans seem to think so.

Over the weekend, Kiernan Shipka – who plays the title character in Chilling Adventures of Sabrina – posed for a selfie with Riverdale’s lead actor, KJ Apa (Archie), and jokingly captioned the photo: “Me & the royal baby. Congrats Meghan & Harry!”

While it seems like an innocent photo between two pals, fans (and us, kinda) have come to the conclusion that the two stars are actually filming that much-anticipated, hasn’t-been-confirmed-in-any-way crossover episode. After all, they both look like their characters (Archie’s red hair, Sabrina’s white hair).

Take a look at the photo below and see what we mean.

Given that the towns of Sabrina (Greendale) and Riverdale (Riverdale, duh) are basically neighbours, and the characters have already met each other in the Archie Comics universe, viewers have been left speculating over a potential crossover for the two shows.

Despite being described as “two separate entities” by producer Jon Goldwater last year, episode seven of Sabrina’s first season appeared to confirm the crossover potential when Miss Wardwell had a pizza delivered by none other than Riverdale’s Ben Button.

Also, fun fact for ya: Sabrina was originally set to air on The CW as a companion series to Riverdale. However, it was scooped up by Netflix in the end. So… it looks like an official crossover isn’t out of the question. Maybe Archie could use his newfound boxing skills to assist Sabrina against the forces of darkness? That would be a great help!

The first two seasons of Sabrina and all three seasons of Riverdale are available to stream now on UK Netflix.