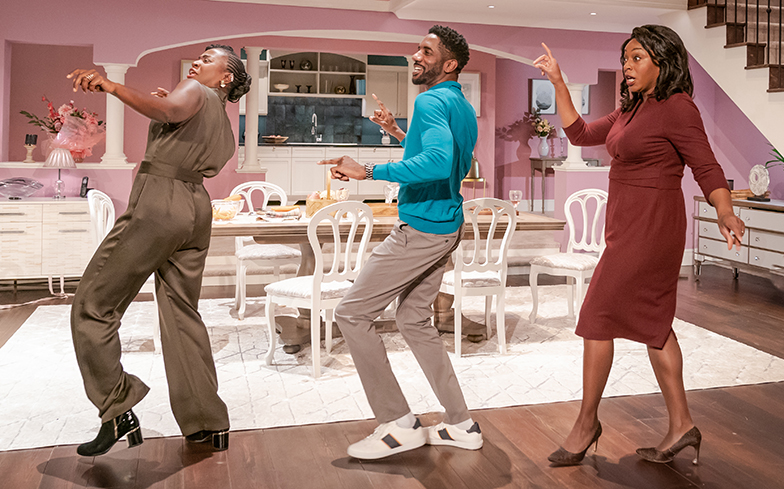 Before beginning this review it’s worth noting that we’ve been sent a post-show message outlining some specific aspects of the play which we’re not allowed to talk about. While it’s understandable that the surprises are best kept a secret, it also makes detailing what makes this production so impressive quite a challenge. Suffice to say there’s some exceptionally powerful and provocative stuff towards the conclusion, but we can’t tell you what that is or indicate how it unfolds.

Fairview begins conventionally enough – arguably a little too predictably. Set in a pretty, immaculately-decorated family home, it initially packs all the punch of a whimsical, light-entertainment family comedy. Everything has to be just-so for the mother’s birthday – cue a variety of silly mishaps, from the difficult sibling’s newly-acquired dietary requirements to the burnt birthday cake. It all unfolds as expected, and the observations of this African American family are all a bit cliché – there’s a lot of pandering to racial stereotypes.

At the point where we’re convinced we’re just watching some dated sitcom adapted for the stage, the curtain comes down and we’re ready for act two – and this is where things get interesting. While we don’t want to give much away, the second act presents the family’s words and actions from an entirely different perspective. It’s a show which intelligently lures its audience into a false sense of security, only to pull proceedings in an unexpected and unpredictable direction.

We won’t say what happens in the final section of the performance, but expect the unexpected – a whole host of theatrical conventions are completely thrown out of the window. Fairview reveals itself to be a play not simply about a black family, but much more about how white people view others who are not white. It’s an incredibly thought-provoking piece of theatre, one that doesn’t shy away from making its audience feel uncomfortable.

We’re aware the show won’t be everyone’s cup of tea – the first act, while necessary to make the remainder of the play have an impact, is all a bit daft and conventional. We spent much of the second act squirming in our seats, having a whole variety of our preconceptions challenged. As such we can’t really say it’s an enjoyable theatrical outing, but it’s certainly an impressive achievement.