Faceless is a compelling, intelligent and provocative new play – review 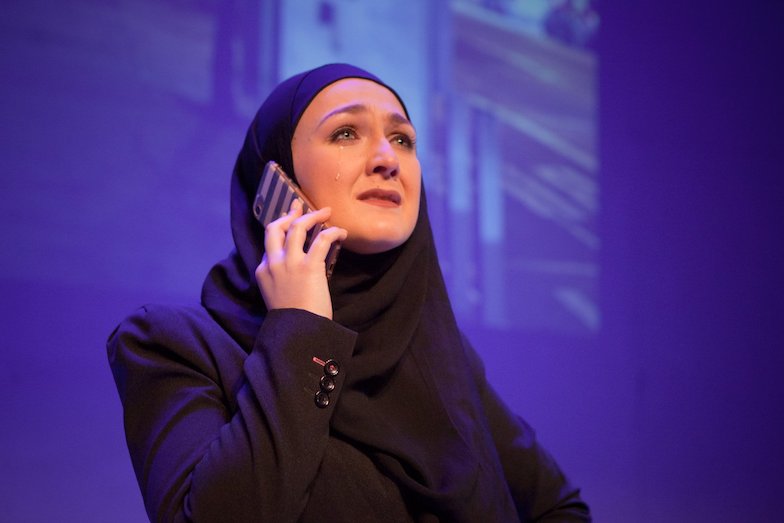 Faceless certainly sounds like a challenging piece of theatre. It tells the story of Susie, a suburban Chicago teenager who starts an online conversation with a man named Reza. He convinces her to convert from Christianity to Islam and persuades her to travel to Syria where she intends to join ISIS. Her online activity is tracked and Susie is arrested; Faceless focuses on her trial and the events both inside and outside the court room. Over the course of little more than an hour, it touches on a whole range of topics including race, religion, gender and class.

These are big issues and it’s a provocative subject matter but they’re handled intelligently, delicately and with a surprising – and refreshing – quantity of humour. This is primarily because it’s an incredibly well-written piece; the text is genuinely funny, the serious moments are allowed the gravitas they require while the heavier scenes are interspersed with plenty of lighthearted moments; it’s a wonderfully balanced script.

There is plenty of impressive acting to enjoy here, too. Of particular note, Paige Round turns in a powerhouse performance as prosecutor Claire Fathi. Absolutely fierce in the courtroom, exuding confidence around her older, male colleagues, and brave in the face of racism, she still allows the audience an insight into her vulnerabilities; she plays the part with incredible humanity. We also enjoyed her sleazy boss Scott Bader, played by Matt Mella – he was commendably unlikable.

We did have a couple of minor issues with Faceless, however. The opening doesn’t set the scene or expectations particularly well; while the majority of the play is fast-paced, engaging and confident, the start is a bit slow and wobbly. It may have just been opening night nerves, but we weren’t given a great first impression. We also weren’t particular fans of the use of stock images – a street scene or a solicitor’s office, for example – to set each scene. While they did allow for seamless changes, they were never anything more than functional.

In the context of the play as a whole these aren’t big problems and we still thoroughly enjoyed our trip to the Park Theatre. Faceless is an intelligent and compelling play which handles a provocative subject matter in a delicate and sensitive way, with a healthy dose of humour and some impressive acting thrown in too. Well worth checking out.