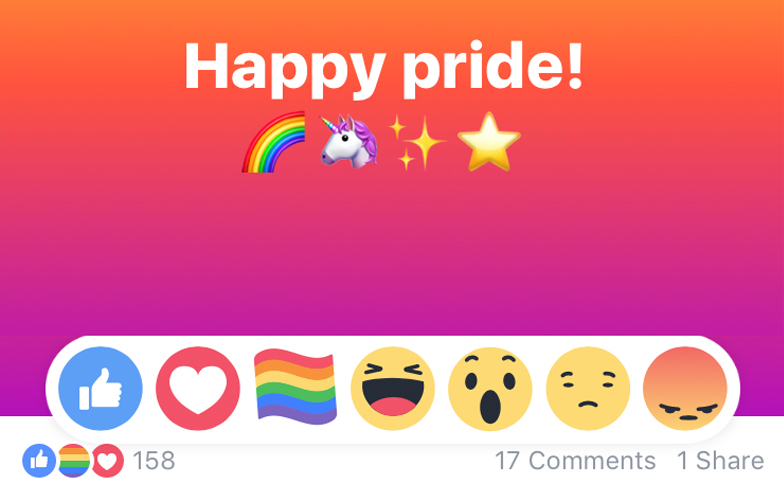 Last year millions and millions of Pride reactions were sent across Facebook profiles throughout the summer.

The social media giant rolled out the new reaction for the duration of Pride Month in the US, and even extended its availability for other Pride events, including London which takes place in July.

Those who wanted to express their Pride during Pride Month could simply like Facebook’s official LGBTQ page and then the rainbow flag emoji would become available for them to use.

As well as the community using it to celebrate everything fierce and fabulous about LGBTQ people and their achievements, the reactions were also used to troll anti-gay organisations and figures.

However, as Pride Month began last week on 1 June, fans of the reaction noticed that Facebook hadn’t made it available again.

The social media company have since confirmed they have no plans to reintroduce the Pride reaction emoji in 2018.

Not everyone was happy with the introduction of a Pride reaction last year when it first rolled out across the platform.

As soon as Gay Times posted a story about the new feature, we were inundated with opposition to it on our Facebook page.

Arguments ranged from the rainbow symbol being stolen from the bible, to the age-old ‘I don’t want your gayness plastered all over the place’.

What’s more, it became apparent that Facebook also hid the function from users in countries where there are anti-gay laws in place.

Facebook users in Egypt, Russia, Singapore and Palestine, among many others, did not have access to the Pride reaction emoji on their accounts.

That being said, Facebook have introduced new rainbow features that will be available all year round for people to celebrate Pride. There are a number of colourful frames for people to use, as well as Pride-themed text posts and rainbow effects.

“The LGBTQ community has always been a celebrated part of Facebook,” said Alex Schultz, vice president of growth at Facebook.

“We know representation and having a community matters — whether that be LGBTQ people sharing photos that can change hearts and minds, or using our products, like Facebook Groups, to find a supportive network.

“We know that people in the LGBTQ community are supporting one another worldwide and year-round, which is why we’re making all of these effects available throughout the year.”