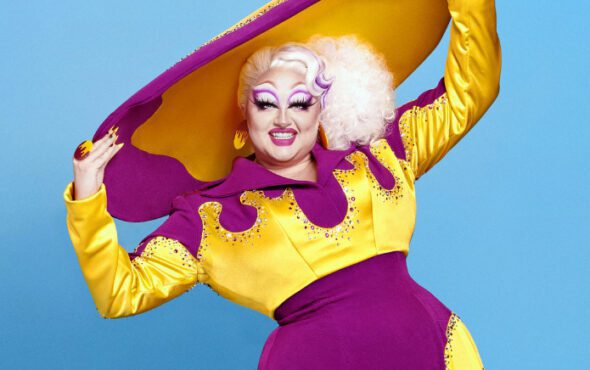 Victoria Scone has opened up about her participation on the third season of RuPaul’s Drag Race UK.

The beloved queen, who hails from Cardiff, is about to make herstory for the Emmy Award-winning franchise as their first ever cisgender female competitor.

In all 22 seasons of the show hosted by RuPaul – which include the US original, its All Stars spin-off, Drag Race UK and Drag Race Down Under – the series has primarily welcomed cisgender male competitors and, although less frequently, non-binary and transgender queens.

(Kylie Sonique Love, originally from season two, just conquered over Eureka, Ginger Minj and Ra’Jah O’Hara on All Stars 6 to become the first transgender queen to take home the crown on a US season.)

Speaking with GAY TIMES, Victoria says being cast on the critically-acclaimed British spin-off is a “big deal” for drag artists around the world who aren’t cisgender men.

“It’s very exciting. Again, a long time coming,” Victoria tells us. “There’s a plethora of diverse drag that the UK and the world is yet to devour on mainstream TV, so this is it. Here we go!”

On whether she felt pressure sashaying into the werkroom as the first cisgender female queen, Victoria ruveals: “It’s a lot of weight on my very large shoulders… I went in with such a good mindset.

“Looking back, I was so very ready and prepared. I understand there is some pressure there but I was like, ‘I’m meant to be here.’ It all felt very right, very correct, right time and right place.”

Victoria describes her drag as a blend of “traditional and alternative,” but acknowledges that she’s only considered to be the latter because “I have a vagina.”

“Also, as a woman in drag, I had to make myself very palatable and bookable from the offset so people would want to book me, because people are sometimes unsure,” she continues.

“I knew that I had to sing and dance, that’s fine, I can perform and hold a stage. But, I needed material that people would enjoy and have a good time with at 11pm in a gay bar. I needed to be bookable. So, my drag is enjoyable.

“My existence is political in drag and I talk a lot about the politics in drag, but as a performer, I just wanna have a good time. I’m there to bring the party! We’re all gonna sing along, it’s gonna be a bit camp and have a great time.”