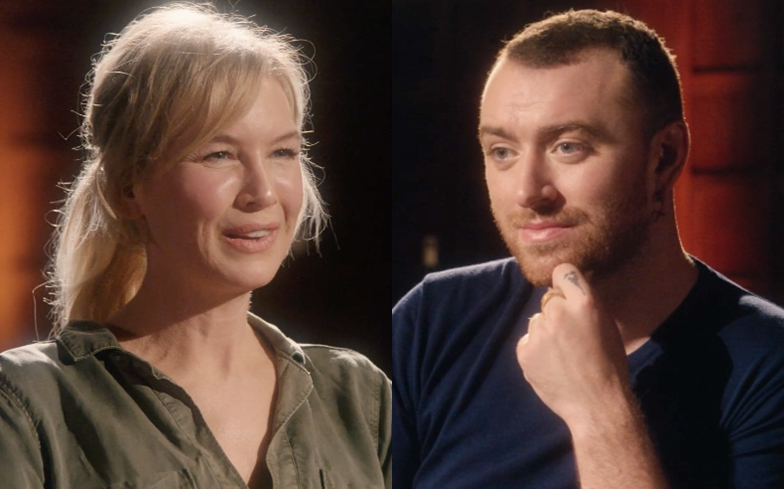 Renée Zellweger and Sam Smith are the perfect pair on their “super camp” Get Happy duet.

The Academy Award-winning actress has taken on the role of a lifetime as she steps into the ruby slippers of Hollywood legend and LGBTQ icon Judy Garland for a new biopic based on her final concerts in London in 1969, already winning critical acclaim.

As well as covering some of Judy’s most iconic songs including Over The Rainbow, For Once In My Life and Come Rain Or Come Shine, Renée has also teamed up with British singer-songwriter Sam Smith for a joyful duet of Get Happy.

Speaking to each other about the movie, the duo bonded over their love of LGBTQ icon Judy, and talked about how their duet of Get Happy came about.

“I’d just come off tour and I was struggling with fame and with what’s happened, and I went to watch that film and just cried throughout the film, it was a really cathartic and beautiful experience,” Sam explained.

“Afterwards, this opportunity came up which I didn’t expect at all, and I got sent a few of the songs you’d done, and my natural gut instinct was to go for something sadder, because it’s my comfort zone.

“But when I heard Get Happy, that song is such a juxtaposition to her life, it’s like, ‘Forget your troubles, come on, get happy’, and it just feels right to me to celebrate her life and not mourn it, musically.

“That’s what I wanted to do in that moment with you, was to celebrate her in a happy way.”

Renée added: “I’m excited about it, because when I hear it, it really makes me joyful, I wanna turn it up… it’s a celebration, isn’t it?”

Watch Sam and Renée’s conversation below.

Judy: The Original Soundtrack is out now.