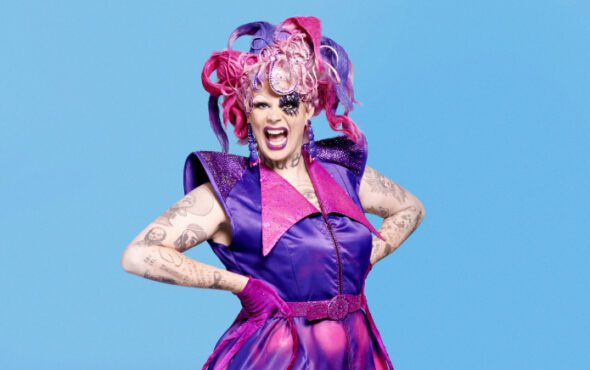 The third season of RuPaul’s Drag Race UK has “more twists” than any other season in herstory, according to Anubis.

“I would describe it as a season with the most twists in Drag Race herstory,” says the star. “There are more twists than a cheese twist in a bakery. There are so many twists, it’s ludicrous. You’re gonna be gagged, gooped and every other syllable you can think of for a drag queen to say.”

Anubis praises the diverse slate of entertainers on the season, from “theatre queens, weirdos and camp girls,” adding: “I think all of us bring something totally different and it’s a really diverse cast in terms of skillset, and that is why the season is gonna be major.”

The star also reminisces on her werkroom entrance, saying she felt like she had “won the lottery” and been “sentenced to death” at the same time because of how “daunting” it was meeting her season three competitors.

“It was the most scary, horrible thing of my life, but I don’t regret it for a thing and I wouldn’t change it. Know what I mean?” she explains.

“You’re in that room with 11 other incredible performers who can all do things you can’t and you think, ‘Oh fuck.’ Then, you’ve also got to remember that you can do things they all can’t, so it’s a two-way street. That feeling is just absolutely insane. It’s better than sex and not many things are. I’m actually having sex right now.”

Anubis, who has been watching the series since she was 13, says her main inspirations are “funny and artistic” past Drag Race alumni who “can hold a room” such as Bob the Drag Queen, Bianca Del Rio, Jinkx Monsoon and Sasha Velour.

Because of how she’s studied each of these queens (who all happen to be the winners of their respective seasons), Anubis says she felt “prepared” to conquer Drag Race and its staple challenges, such as the Snatch Game and Rusical.

You can read our interview with the cast of Drag Race UK season three here.