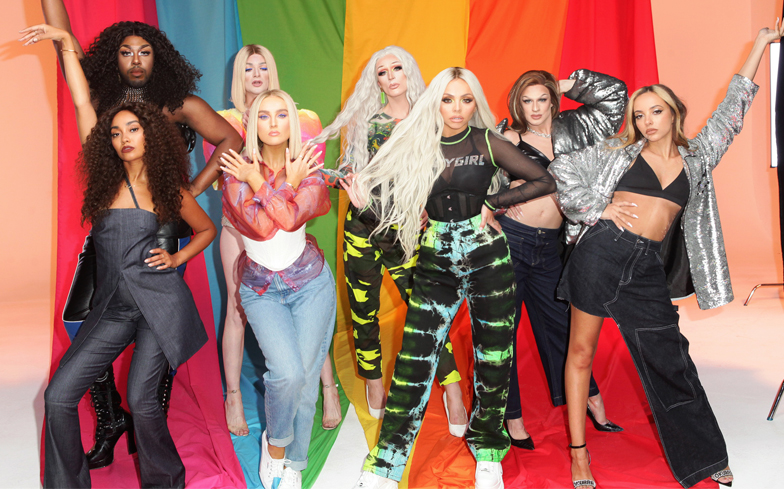 If you thought Little Mix’s new single Bounce Back couldn’t get any more sickening, then you were wrong.

The girl group have teamed up with the Sink The Pink queens for a new Pride music video for their addictive new anthem, continuing their longstanding allyship with the LGBTQ community.

Jade Thirlwall, Perrie Edwards, Leigh-Anne Pinnock and Jesy Nelson face off with drag versions of themselves in the vibrant new visual, which you can watch here first on GAY TIMES.

With the Pride flag colours on full display, it will get you hyped up for Pride in London this weekend, as well as the other celebrations that will happen across the UK and Europe this summer.

The music video also includes a shoutout to akt (formerly the Albert Kennedy Trust) at the start and end of the video, raising awareness of the incredible work they do.

akt is a British charity who support homeless LGBTQ youth, giving them shelter and the tools to get off the streets and out of harm’s way.

Bounce Back was released last month and marked the first taster of new music since their fifth studio album LM5 back in November.

The original video has already been viewed more than 20 million times over the past week.

The group will head out on a huge arena tour later this year, playing 32 dates across the UK and Ireland. That will include five headline shows at London’s iconic O2 Arena.

What’s more, this autumn Jade Thirlwall will realise her dream of being a special guest judge on RuPaul’s Drag Race.

The singer was confirmed as a guest judge for the upcoming first series of RuPaul’s Drag Race UK, which will air on BBC Three later this year.

“I love absolutely everything about drag. I love that it’s art,” Jade said. “I love how fabulous it is, how fun it is, I love that you can transform your body into a fantastic beautiful woman… the whole thing!

“I just wish in my next life I can be a drag queen.”