Exclusive: Maggie Lindemann on her explosive queer rock anthem She Knows It 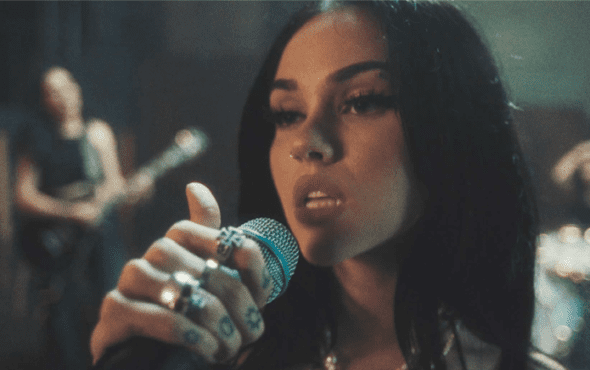 The American artist exclusively breaks down the meaning behind her unapologetic pop-rock single for GAY TIMES.

Maggie Lindemann is back with new music and this time it’s an addictive comeback hit.

The new track, She Knows It, is the singer’s first release since her acclaimed grunge pop EP, Paranoia. A music video starring Lindemann and directed by Vixxion has been released.

Speaking exclusively to GAY TIMES, the rock pop artist explained the inspiration behind the anthemic single.

“A couple of years ago I liked this girl who had a boyfriend, so this year while working on my album I decided to write a song about exactly that haha,” she told GAY TIMES.

“She would flirt with me and do things so I knew it was mutual but then would make it seem like it was all one-sided, but me and my friends all knew the truth, so I said fuck it imma write about it and I know a lot of women-loving-women can relate.”

Lindemann elaborated on the song’s purpose in a press statement:  “I wrote this song about how I liked a girl who had a boyfriend. She would confide in me about how shitty he was and say and do things that would kind of lead me on but then
tell me she didn’t ‘mean it like that’…so I was like fuck it, I’m gonna write about it.”

Accompanying the bold new track is a dramatic new video exploring the concept of She Knows It. The 23-year-old broke down the creativity behind the visuals: “I wrote up the concept kind of right when we made the song. I instantly had a vision for it and wanted to give it a high school 2000’s feel but also keep it current and industrial and surreal spin from a normal
classroom setting. I wanted to tap into my high school fantasy — haha.”

You can watch the music video for She Knows It here or below.

Related: Maggie Lindemann is ready to rock your world