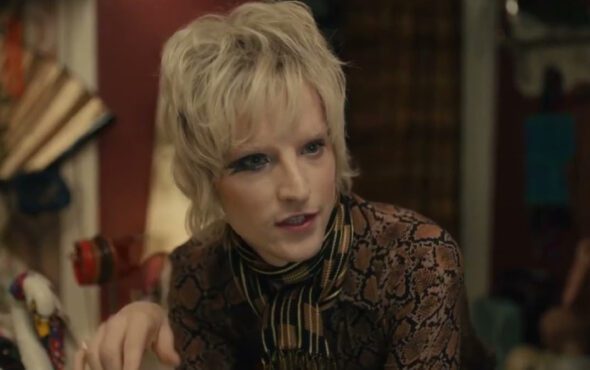 John McCrea has revealed where he wants to see his character in the upcoming Cruella sequel.

Released earlier this year to critical acclaim, Cruella is set in London during the 70s punk-rock movement and stars Oscar winner Emma Stone as the iconic title character, an ambitious grifter and talented fashion designer.

McCrea, best known for originating the role of Jamie New in British musical Everybody’s Talking About Jamie, co-stars as Artie, an androgynous shop owner who assists the future puppy-napper as she makes a splash in the world of fashion.

With Cruella recently greenlit for a sequel, and Emma Stone, director Craig Gillespie and screenwriter Tony McNamaera all on board, we asked McCrea where he would like to see his David Bowie and Mark Bolan-inspired character in the follow-up film (if he returns).

The British actor kept it brief, admitting he “hasn’t really given it any thought,” but added: “Maybe doing some more rock music, some more performing – just causing more trouble!”

As Disney’s first ever openly queer character in a live-action production, and one of the Cruella’s most acclaimed characters, Artie’s return in the sequel is inevitable. Here’s hoping Artie’s role is more prominent this time around and his character is more fleshed out.

Maybe a same-sex love interest? We can dream, can’t we?

When we initially spoke to McCrea about the film, he said of the groundbreaking role: “I don’t think Disney have ever had a character quite like Artie before, so I’m just really thrilled to be the person to bring that into that Disney world.”

He also revealed that the character was originally written as a drag queen. “But then, that idea changed because everyone realised it was more important, like I said, that it’s a lifestyle choice for him – it’s not a performance. But yeah, he’s fabulous in every single way,” he explained, before adding of his sexuality: “I think it’s important to say he is queer because obviously, lots of people were dressed like that at the time that weren’t necessarily queer, but in my head, he always was.”

Due to the coronavirus pandemic, Cruella was simultaneously released in cinemas and Disney+ with Premier Access. Despite this, the film still grossed over $200 million at the worldwide box office, becoming the seventh most successful film of 2021 (so far).

Cruella is now available on Blu-Ray and DVD. It will be available to stream for free on Disney+ from 27 August.