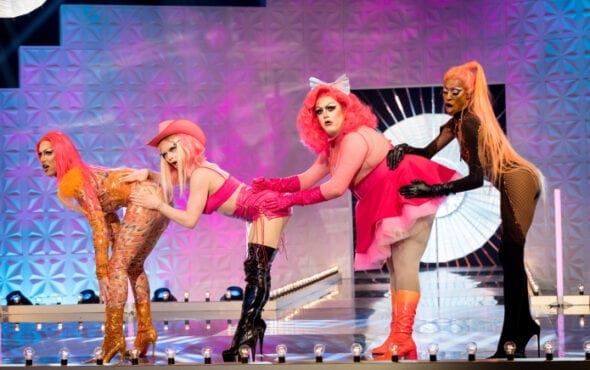 Could the United Kingdolls bing bang bong the charts again? According to the quartet, it’s likely.

Their performance received widespread acclaim from the judges. Viewers also hailed it as one of the best musical numbers in herstory alongside the likes of Read U Wrote U and Kitty Girl on All Stars 2 and 3, respectively.

Following the episode, UK Hun? skyrocketed to number one on iTunes, triumphing over new entries from stars such as P!nk, Dua Lipa and Taylor Swift, before making its debut on the UK Singles Chart at number 27. To put it into perspective, this is a higher position than RuPaul’s signature hit Supermodel, which peaked at 39 (shockingly), and The Frock Destroyers’ classic anthem Break Up Bye Bye, which peaked just outside the top 30 at number 35.

Although Tayce and A’Whora admit that UK Hun? is never spoken of in their flat – “It’s like Voldemort in Harry Potter!” – the latter says it’s “surreal” to have bing, bang bong’d the UK Singles Chart. “I wish it was something with a bit more taste,” she jokes, to which Tayce responds: “But here we are! We push through baby! Teletubbies on acid!” Bimini adds: “Having UK Hun make it into the Official Singles Chart is crazy because I grew up as a pop fanatic. My music tastes are so varied and my dad would always be like, ‘Pop music is rubbish!’ and all of this, but I’m obsessed with it. So, to be in the charts is mind-blowing.”

Lawrence says: “Yeah, I can’t believe it. As someone who doesn’t sing and dance, it’s just not what I’m accustomed to, I’m so proud of us for making it work. Not even making it work, we made it a hit! It just means so much to me and the rest of the girls because people can’t get it out of their heads!” A’Whora claims that UK Hun? has now become the new “gay language” due to the fact that she’s been propositioned on gay dating apps from users with the now-iconic lyrics. “They’re like, ‘Show me your ding dang dong. Fancy a bing bang bong?’ I’ll say hey and they’ll say, ‘UK Hun?’ Block!”

When recording the song with chart-topping singer-songwriter MNEK, all four queens didn’t think the song would take off on the charts, let alone become the supreme lockdown anthem for viewers around the world. “On the show, you’re going full speed ahead, so you don’t have time to think, ‘Maybe we just made a banger.’ The fact that everyone is in the same position right now and there’s this song to uplift and brighten people’s moods is nothing short of amazing,” explains Bimini.

The future Grammy Award-winning entertainers are unanimous in their sentiments that the best part of the experience has been the outpouring of love from fans and “seeing the internet light up with memes.” For Lawrence, her highlight has been forming friendships with her United Kingdolls competitors, as it was her “first taste of friendship” on the series. “We got on with each other and we weren’t beating on each other,” she admits. “It was so much fun, and it showed.” Bimini agrees, stating: “It was a real cementing of our friendships.”

Following similar success with Break Up Bye Bye on the first season of Drag Race UK, The Frock Destroyers – which consists of Baga Chipz, Blu Hydrangea and Divina De Campo – released a debut album, executive produced by Leland. When asked if the United Kingdolls could potentially follow in their footsteps with a full-length collection, Lawrence teases that “anything could happen”.

“Stay tuned. I know we’re all up for it and would love to do it, so let’s see what happens,” she tells us. Bimini chimes in, “Manifestation works. ‘United Kingdolls will release a hit album’ – manifest and it will happen!” while A’Whora and Tayce exclusively reveal that UK Hun’s follow-up will be titled either Ping Pang Pong or Ting Tang Tong. Sounds like a hit to us!

The eighth episode of RuPaul’s Drag Race UK season two premieres tonight at 7pm on BBC iPlayer. For their latest maxi-challenge, the top five contestants – which includes all four United Kingdolls plus Ellie Diamond – will write and perform their own comedy stand-up routines. The Vicar of Dibley icon Dawn French will make her debut on the panel alongside RuPaul, Michelle Visage and Alan Carr.

UK Hun? is available to download and stream now on all music streaming platforms, from World Of Wonder records. Download the track on iTunes here.