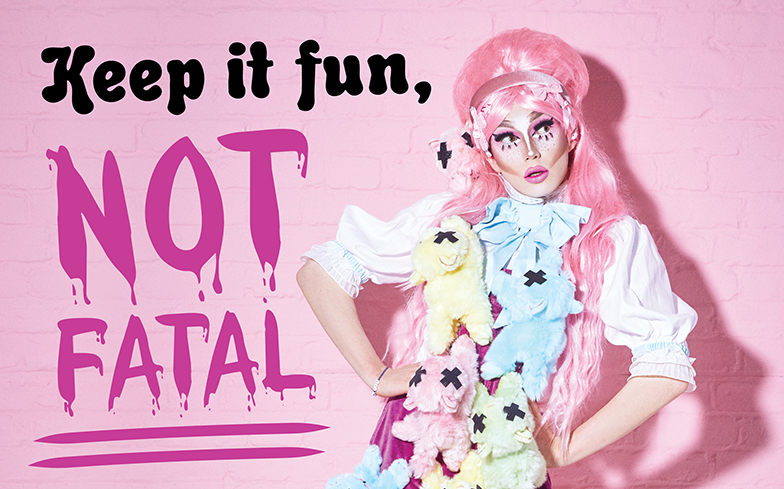 Scaredy Kat is celebrating vegan fashion in a sickening new campaign for PETA.

The Wiltshire-born drag performer, who starred on the first ever season of RuPaul’s Drag Race UK, wears a twisted faux-fur dress made of “dead” plush cats in the campaign and urges those to sashay away from wearing leather, feathers, and fur.

In an exclusive video interview, Scaredy – an outspoken vegan – says of her lewk: “You wouldn’t kill your cat and put it on a coat, so why should you kill a fox or, like, a mink or anything else? Because there’s not really any difference.

“Cats and dogs are used in the fur and leather industry in China, and there’s no penalties for that. It’s often intentionally mislabelled, so you could be wearing a pussy and you don’t even know it.”

Scaredy joins a long list of celebrities and fellow drag icons who have teamed up with PETA to promote kindness to animals, including RuPaul herself, Drag Race UK host Alan Carr, Drag Race season 4 winner Sharon Needles and Lady Bunny.

When we spoke to the performer after her exit, we questioned her on if she would return for a future season of All Stars, to which she responded: “Yeah, give me a bit more money, a bit more time, definitely. Why not?

“It would be funny because I know how it all works now so I can infiltrate and fuck it all up.”

When it comes to a potential crossover between Drag Race US and Drag Race UK, Scaredy said: “Obviously, it’s going to create some sort of a divide, maybe a bit of conflict, like it has in the US.

“But then again, it brings a lot of attention to what UK drag has to offer and it will do a good job of showing the variety.”