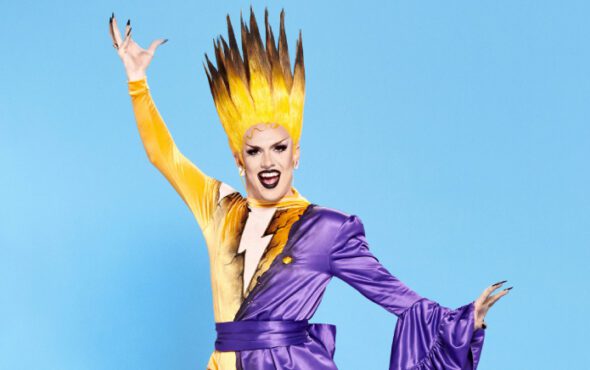 Elektra Fence has revealed the hilarious story behind her drag name.

The Lancashire-based drag queen was recently announced as one of the 12 incredible British entertainers participating on the third season of RuPaul’s Drag Race UK, which sashays onto BBC iPlayer in September.

In an exclusive interview with GAY TIMES and the rest of the cast (which you can read in full here), Elektra admitted that her drag name originates from the “silliest thing” she’s ever done – and yes, it involves an actual electric fence.

“I was up North walking me dog with me mate. She had this fence in her garden and she was like, ‘Touch the fence Julian,'” explained Elektra.

“I was like, ‘Alright!’ I didn’t know the shock goes through every five seconds or whatever, I don’t know the technical talk, and I kept missing it.

“The next minute I was shocked and I landed in cow droppings. I was covered in mud, my dog was somewhere running around the field and I was like, ‘What is going on?’ Then obviously, it must’ve hit something in here because it created this.”

Elektra urged her followers to not “try it at home” and said she does not “condone touching electric fences or plug sockets or anything.” Wise!

When we told Elektra that this is her equivalent of Spider-Man’s Spider-Bite, she launched her bid for a role in the Marvel Cinematic Universe.

“I love that. If Marvel start writing a story about a superhero woman who touches an electric fence and turns into this electric woman, then we know where they got it from,” she joked. “Do you know what that mean?”

Elektra added: “Unless they want to a partnership deal, I’m down for that.”

The 29-year-old performer, who is inspired by “Northern warrior women” such as Bet Lynch and Jane McDonald, is renowned for her various stunts such as “dropping from the sky down into the splits, bouncing into a headstand, spinning around, leaping onto the bar and leaping off into into the splits.”

Elektra said she wants to inspire LGBTQ+ youth who are bullied in school to see that “no matter where you come from or how you were brought up, it’s not the be all and end all,” and to represent the “different” kids who are “afraid to step outside the box, or their hometown or afraid to brighten up their hometown.”