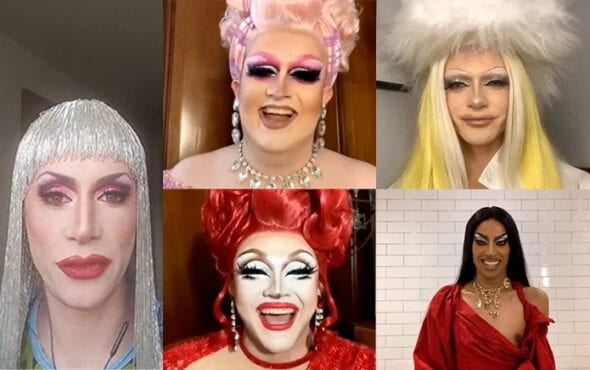 Ahead of season two’s grand finale, one of the franchise’s most beloved contestants, Divina De Campo, hacked into our Instagram account to chat with the four incredible finalists, before asking some hard-hitting questions from fans.

First up was Lawrence Chaney, who spoke with the Frock Destroyer about comments on social media from viewers, the legendary maxi-challenge she wanted to compete in and the drama and conflama of the Scottish drag scene.

Ellie Diamond shared her journey from flipping burgers in McDonalds to showcasing her charisma, uniqueness, nerve and talent on the Olympics of Drag, before spilling the T on her and Tayce’s rare double shantay.

East London’s bendiest queen, Bimini Bon Boulash, reminisced on her powerful conversation with Ginny Lemon about their non-binary identities, and how she defied all odds to make it to the final.

Finally, Tayce invited viewers into her bathroom as she gushed over – yep, you guessed it – beans on toast. The Welsh dancing diva also revealed her alternate Snatch Game character, as well as the US winner she wants to battle in a lip-sync.

Trust us, there’s a lot of T here! You can watch Divina De Campo speak with Bimini Bon Boulash, Ellie Diamond, Lawrence Chaney and Tayce below.

Tonight’s finale will see the queens compete in an all-singing, all-dancing extravaganza for the crown.

Choreographer Jay Revell will coach the contestants in their last maxi-challenge, while Michelle Visage, Alan Carr, Graham Norton and all of the eliminated queens ruturn to witness RuPaul crown a brand new queen.

The grand finale of Drag Race UK season two will be available to stream on BBC iPlayer from 7pm.