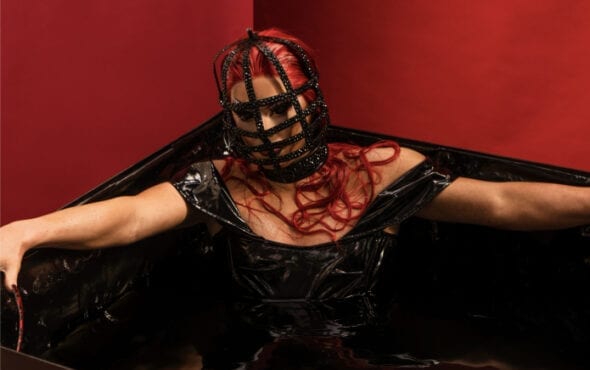 Written by the star and Katie Colman, with production from Hitbox Music, Aesthetic is a Lady Gaga, Billie Eilish and Madonna-inspired pop banger with house and dance influences, as well as rap with a fierce spoken word section.

Speaking with GAY TIMES, Cherry says Aesthetic was written after her elimination from the second season of RuPaul’s Drag Race UK, although she’s had the concept in her head for “years”.

“Everyone talks about my aesthetic, and I’ve never really known what that meant. Going through Drag Race and the past year, it’s allowed a lot of us to take a look at ourselves and who we are as people,” she explains.

“Where I’m at now, I feel solid in who I am as an artist and what I want to say. Aesthetic has stuck with me for years, and I think it talks about that in a really cool way. This is what I want to say right now.”

Cherry also wrote Aesthetic in mind for the LGBTQ+ club scene when the pandemic comes to an end and it’s safe to bust a move on the dancefloor.

“I just wanted something feel-good that you can see yourself dancing to. I was thinking forward to the days where we can dance again,” she says.

Aesthetic will be the first of many singles for Cherry, as the drag entertainer reveals that she’s written “probably 50 tracks” for a possible debut album.

“Music has always been something I’ve done alongside everything. Now that I’ve got the ability to push it and take it further, visually as well, I’m gonna do as much as I can. It may be part of a bigger project down the line!” she admits.

Cherry has already mapped out a storyline for the Aesthetic music video, which will be coming out in the next few weeks. She calls the concept “next level”.

“Imagine the craziest things, we’ll probably go above that. It’s going to be packed full of high-fashion, over-the-top, avant-garde runways with really cool visuals, that I don’t think I’ve seen a drag artist do before,” she adds.

“I can’t talk about it without giving too much away! If I’m going to do anything from now, it needs to better than what I’ve just done. We’re never taking a step back!”

You can watch the official lyric video below.